BCG vaccine trial worth a try in Africa, says professor 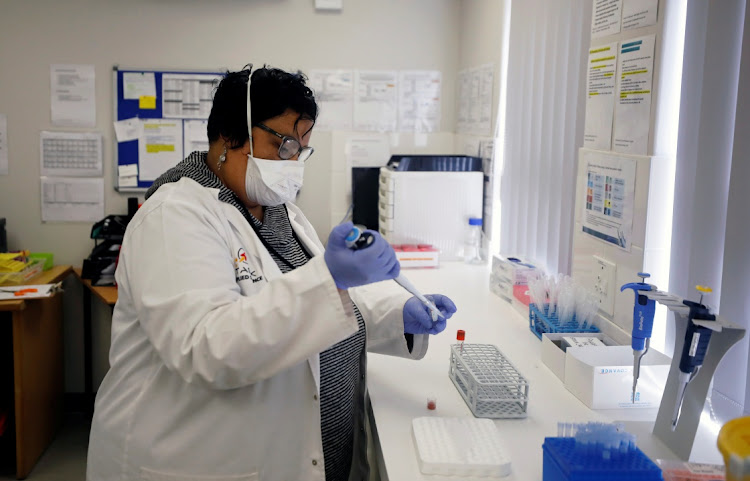 A researcher studying the BCG vaccine for TB examines test samples in a TASK laboratory in Cape Town, May 11 2020. Picture: REUTERS/MIKE HUTCHINGS

The idea of testing the Bacille Calmette-Guérin (BCG) vaccine in Africa against Covid-19 was bound to cause controversy, yet officials say efforts underway could, if successful, give the continent a cheap and easily deployable weapon against the coronavirus.

Biotech group TASK started the continent’s first trial in May to see whether 250 high-risk workers given a booster dose of BCG vaccine show better protection against Covid-19 than the same number given a placebo.

Three thousand health workers are eventually expected to be involved in the trial overall. Researchers expect preliminary results within six months in the year-long trial.

Tests to see if the century-old BCG vaccine, widely used in Africa for TB, protects against the new coronavirus have also begun in the Netherlands and Australia. But unlike those countries, where BCG vaccinations at birth aren’t the norm, SA’s trial involves injecting people for a second time.

BCG injections are mandatory at birth in SA, where TB is a leading killer.

“We are trying to see if ... reminding the immune system of that vaccine will make a difference,” said Andreas Diacon, a professor at Stellenbosch University’s medical school, who founded TASK in 2005 to hunt for novel medicines and vaccines.

“Perhaps it works, perhaps it doesn’t, but it’s definitely worth trying ... [because] we just need to know if it can help us through this Covid-19 crisis,” he said at TASK’s high-security mycobacteriology laboratory.

Trying out a new medical intervention in Africa always rings alarm bells because of an unfortunate history of big pharmaceutical companies using Africans as guinea pigs. So when a French doctor suggested in April that the BCG should also be tested in Africa as a possible shield against Covid-19, it provoked a predictable social media backlash.

Yet the vaccine is widely regarded as safe, and officials involved in the trial at Tygerberg hospital in Cape Town point out that it is so readily available in Africa and the developing world that poor countries with limited health resources could benefit massively from the discovery that the shot is effective.

“If you look at BCG as a potentially cheap and available tool that African countries can afford ... it does make sense,” Diacon said. “The results will be relevant for ... parts of the world that do not have access to first-world medicine.”

The World Health Organisation (WHO) has warned that the next epicentre of the pandemic could very well be Africa, where measures to contain it are harder to implement and health services much more likely to be overwhelmed than in the West.

Across Africa, there is less than one intensive care bed and one ventilator per 100,000 people, a Reuters survey found. The continent has about 85,329 confirmed coronavirus cases and 2,784 deaths, compared with 320,000 deaths worldwide since the virus emerged late last year.

There is no known cure for Covid-19 and scientists worldwide are scrambling for vaccine candidates.

A a spokesperson for the SA Health Products Regulatory Authority said, “Our experts have ensured stringent ... criteria for trial participants, as well as all the requisite safety and efficacy monitoring measures during the trial.”

Had Mkhize taken South Africans into his confidence, more people would have understood the rationale for a continued lockdown
Opinion
1 year ago

LETTER: An old vaccine may be worth a new look

LETTER: An old vaccine may be worth a new look