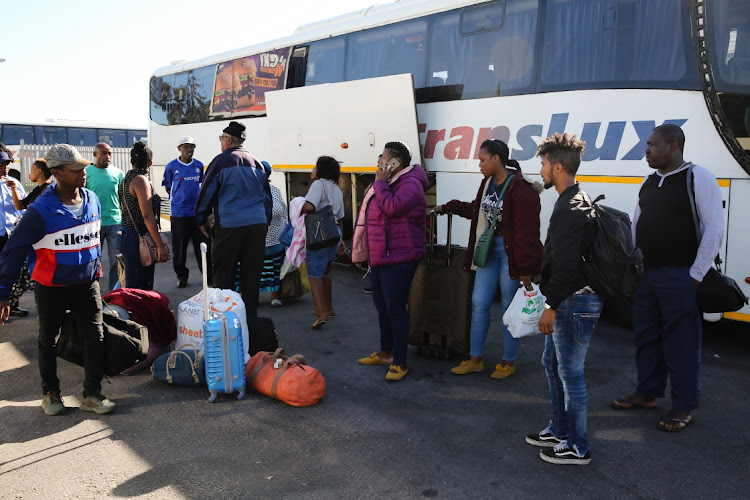 Cross-border public transport is still prohibited, with only essential cargo allowed to be transported across borders. Picture: WERNER HILLS

The government has temporarily relaxed transport regulations to allow a “once-off” movement of citizens across provinces, districts and metros to enable them to return to their homes and workplaces.

The grace period runs from May 1 to May 7, and when it ends, level 4 restrictions will be fully enforced, transport minister Fikile Mbalula said Friday.

“Due consideration will be given to the mining, agriculture sectors to allow limited movements of aircraft for transportation of essential workers [and] spraying of crops ... permits will be approved on case-by-case basis,” the minister said.

He said the relaxation was not meant to allow citizens to visit friends and relatives but to enable those stranded away from home and those returning to work to travel back to where they belong.

Under level 3, a limited movement of scheduled domestic flights will be allowed. Under level 2, the country will fully open its airspace to domestic and international flights, the minister said.

SA moved its coronavirus lockdown restrictions from level 5 to level 4 on Friday. Under level 4, about 1.5-million workers in sectors including mining, manufacturing and agriculture are expected to return to work in the coming week.

Mbalula said level 4 still made it compulsory for all passengers using public transport to wear masks, while operators are still required to carry only 70% of their licensed passenger capacity.

“Masks are compulsory. You don’t enter a taxi or bus without a mask ... No person is allowed to use public transport if they are not wearing a face mask. It is now law,” said Mbalula.

Under the new directives, minibus taxis are permitted to operate from 5am to 7pm, “with a grace period of one hour in the afternoon [so that they can] complete trips and drop off passengers”. The government announced a 8pm-5am curfew as part of the level 4 regulations.

Cross-border public transport is still prohibited, with only essential cargo allowed to be transported across borders.

The Gautrain is permitted to gradually reintroduce its operations covering eight of its nine stations. The Gautrain’s airport service will remain prohibited. While it is now allowed to operate from 5am to noon and again from 3pm to 8pm, social-distancing measures must be maintained, said Mbalula.

Metrorail services are still prohibited, with only freight rail allowed to resume operations.

“There will be no [commuter] trains on Monday, that must be absolutely clear,” said Mbalula, explaining that the government’s Covid-19 National Command Council will decide when to resume commuter rail operations. He said the government was still  considering the risk of transmission, among other factors.

He said repatriation flights bringing South Africans stranded in foreign places or those transporting foreign nationals to their homes are still permitted.

Metered taxis and e-hailing services such as Uber and Bolt are permitted to carry 50% of their licensed passenger capacity. Mbalula said the government will support the transport industry with sanitisers.

Food delivery services such as Uber Eats and Mr D are permitted to operate from 9am until 7pm. “It’s only for delivery of food, not cigarettes or alcohol.”

Courier services and servicing of cars providing essential services are permitted under level 4, while driving licence and vehicle testing centres will be gradually opened for business under this period.

Driving schools are also permitted to resume operations, with the driving instructor and learner required to wear masks at all times.

Mbalula said not everyone will be happy with the amendments, “some of which will be hard and will change our way of life”.

“But we must never forget why we made these difficult choices in the first place: to preserve human lives,” he said.

“All these directions we have announced come into effect immediately.”

The SA National Taxi Council says the fund, to which it is hoped business will contribute as some taxi businesses likely to collapse
National
1 year ago

Two ministers have changed limitations regarding food trading and public transport a week into the lockdown, which is seen as pandering to industry
National
1 year ago
Next Article