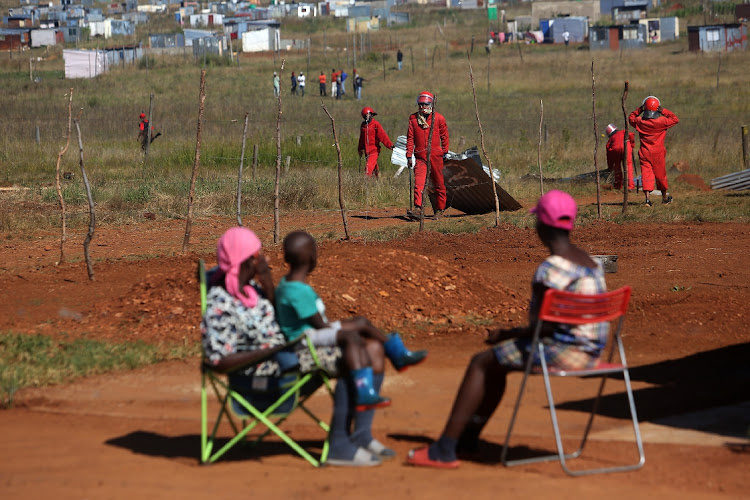 From demolished shacks, to water and electricity shutoffs, the coronavirus lockdown is worsening SA's housing crisis, despite government orders to suspend evictions, residents and activists warned.

With many unable to work or pay rent since stay-at-home orders went into effect on March 27, shack dwellers and renters are particularly vulnerable to having their utilities shut off or being evicted from their homes, rights groups say.

“My children are living in darkness,” said Deborah, a single mother of six from the Democratic Republic of Congo living in inner-city Johannesburg, adding her landlord cut her water and electricity in early April when she couldn't pay the rent.

“It is stressful. My children look up to me and I am struggling to make ends meet,” said Deborah, who sells second-hand clothes on the street and has been unable to earn a living since the five-week lockdown began.

On Thursday, President Cyril Ramaphosa said lockdown measures would be gradually eased from May 1. Those working in the informal economy — about 18% of the workforce — and living in crowded shacks in townships have been left with little financial protection, said activists.

“All inequalities are being exposed by the virus,” said Axolile Notywala, general secretary for the Social Justice Coalition.

The government has issued a directive that municipalities must suspend all evictions and water cuts until the lockdown is lifted. But since the beginning of the lockdown, landlords have evicted or illegally cut water and electricity to about 80 households who couldn’t pay rent across the country, said the Legal Resources Centre — a legal aid charity — and others.

And earlier in April, authorities began demolishing shacks in Cape Town, Durban, Ekurhuleni and other cities, according to  media and rights groups.

The demolition of at least 49 shacks in Cape Town’s Khayelitsha  gathered attention last week when the Legal Resources Centre challenged the city in court over the move, according to legal documents seen by the Thomson Reuters Foundation.

Malusi Booi, a member of the city's mayoral committee for human settlements, said that the demolished shacks were unoccupied and had been built illegally.

“The Covid-19 pandemic cannot be used to justify lawlessness and unlawful behaviour,” Booi said in a statement earlier in April, referring to what he called “land invasions” in the township.

On April 17, the Cape Town High Court ruled that the city was to return building materials to residents so they could rebuild some of the demolished homes on the same land, on the basis that no additional homes are built.

Notywala said many of the destroyed shacks were built by people unable to pay rent after losing their jobs under the lockdown.

Two days before the lockdown started, the City of Johannesburg announced it would reconnect water and electricity of any residents who had previously had their utilities cut due to nonpayment.

Yet some landlords have taken the matter into their own hands, cutting off reconnected water and electricity supplies in response to unpaid rent. Even outside of the coronavirus pandemic, landlords cannot legally shut off a tenant's utilities without a court order according to the Rental Housing Act.

Many of the affected tenants are refugees, asylum seekers and migrants, said Abigail Dawson, communications officer for the nonprofit Consortium for Refugees and Migrants in SA (Cormsa).

"[They] often live a transient life in SA’s cities, working in the informal economy and finding homes they can afford from month-to-month,” she said in e-mailed comments.

“The informal economy has also been in lockdown, creating a major challenge for people trying to survive this period. Having a home has become life-saving in protecting oneself from Covid-19.”

Cormsa are working with other charities to take eviction cases to the renting housing tribunal, a provincial body that regulates issues between landlords and their tenants.

The tribunal's offices have been closed during the lockdown and e-mails have gone unanswered, said Edward Molopi, a researcher for the Socio-Economic Rights Institute (Seri) of SA.

Seri, Cormsa and other rights groups said they would continue trying to reach the tribunal during and after the lockdown.

Dawson said the SA government had made an important and unprecedented move in making people stay at home to flatten the Covid-19 curve, but “the state has the mandate to ensure this is possible”.

With at least one more week of lockdown ahead, Notywala, the human rights advocate, worries that poor access to housing, water and food will increase the chances of more people contracting the virus.

And that will lead to fear and frustration that could heighten unrest among the city’s townships, he added.

Riots and protests have already broken out in Mitchells Plain in Cape Town, and in Johannesburg's Alexandra over promised food parcels that never arrived, according to local media.

“How is a lockdown practical for those in townships, or for the homeless?” Notywala said. “Being able to survive this lockdown is a luxury.”

As Deborah — whose name was changed to protect her identity — waits for someone to turn the water and lights back on at her home in Johannesburg, she is nervous for what the next few months will bring.

“We appeal to landlords to understand that it is not that we don’t want to pay,” she said. “It is simply that we do not have the ability to do so.”

Lockdown day 26: Pictures of the day

Johannesburg Mayor Geoff Makhubo ordered the Red Ants to destroy shacks that had been illegally built by residents of Kokotela informal settlement in ...
News & Fox
2 years ago