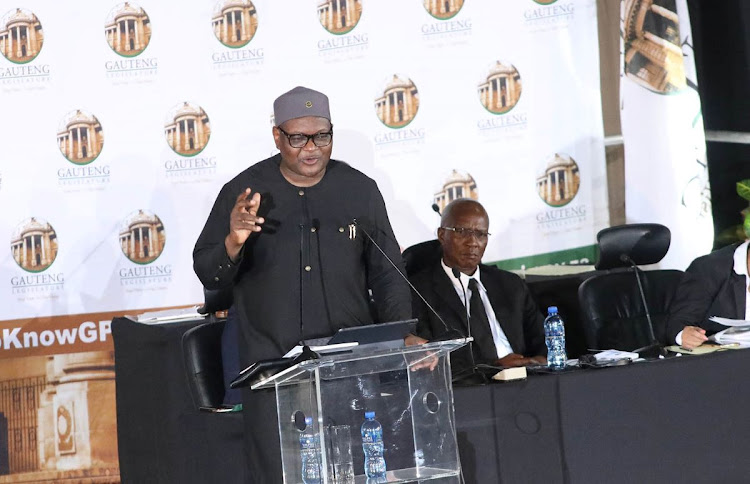 Gauteng premier David Makhura said on Tuesday that his administration would spend billions of rand on building infrastructure and creating more than 350,000 jobs in the next five years.

He said the R60bn they would spend on building and maintaining infrastructure over the period would help facilitate the development of 50 black industrialists.

In delivering his state of the province address (Sopa) at the Sefako Makgatho Health Sciences University in Ga-Rankuwa, north of Pretoria, Makhura said his administration was on track to create “sustainable and decent jobs” for young people over the next five years.

“The premier was mentioning the figures based on the plans he has seen from the provincial treasury. The MEC [Nkomo-Ralehoko] will say where the money will come from. But the R60bn that the premier spoke about will come from the budget,” he said.

In his address, Makhura said the government would  use its financial muscle to help empower small businesses. Over the next five years, the provincial government would set up economic empowerment programmes by spending R4bn a year in buying goods and services from 2,000 township enterprises; supporting 50 emerging black farmers and 20 black agro-processors to help transform their enterprises into full-scale commercial entities; and supporting 500 co-operatives by buying uniforms and food packs for vulnerable households directly from them instead of established businesses.

The premier said he wanted to increase Gauteng’s exports and trade in Africa and that the 10 high-growth sectors identified would produce manufactured goods and services “destined for the entire African Continental Free Trade Area” (AfCFTA).

Makhura said that over the five years the Gauteng city region would attract 447 foreign direct investment projects worth R264bn, which would create more than 69,000 jobs.

Makhura said that the provincial government would this decade drive an “aggressive investment agenda” aimed at unlocking the province’s five development corridors.

Makhura said the provincial government and municipalities would collectively invest R100bn in bulk infrastructure in the five corridors.

“Taken together, the private sector, state-owned enterprises (SOEs), provincial government and municipal infrastructure projects will bring in at least R760bn into the Gauteng economy over the next five to 10 years.”

On electricity, Makhura, who is also ANC Gauteng chair, said the province would request a ministerial determination from mineral resources & energy minister Gwede Mantashe “to enable us to unlock renewable energy projects” to power the provincial economy.

Gauteng is the industrial hub of the country, and uses most of the power generated in SA.

“We will also take decisive steps to increase the availability and use of gas, fast-track our shovel-ready solar energy projects, recommission mothballed power stations, and promote hydrogen fuel cell technology in new developments across the Gauteng city region,” said Makhura.

He said that Eskom's load-shedding was “destroying the economy”.

On the controversial e-tolls issue, the premier, who has used his previous Sopas to lash out at the user-pay system, announced that Gauteng had made a “strong and persuasive case to national government on the e-tolls”.

“I have been assured by President Cyril Ramaphosa that a lasting solution has been found, and an announcement by the president is imminent,” he said.

The SA National Roads Agency’s (Sanral’s) e-toll project, launched in 2013, was largely a failure due to low levels of compliance from Gauteng motorists.

The cash-strapped agency has had to shelve several projects due to lack of funds.

GENEVIEVE QUINTAL: ANC spins its wheels while drivers refuse to budge on e-tolls

POLITICAL WEEK AHEAD: Budget will dominate the political scene this week

What road ahead for e-tolls?

POLITICAL WEEK AHEAD: Budget will dominate the political scene this week

What road ahead for e-tolls?