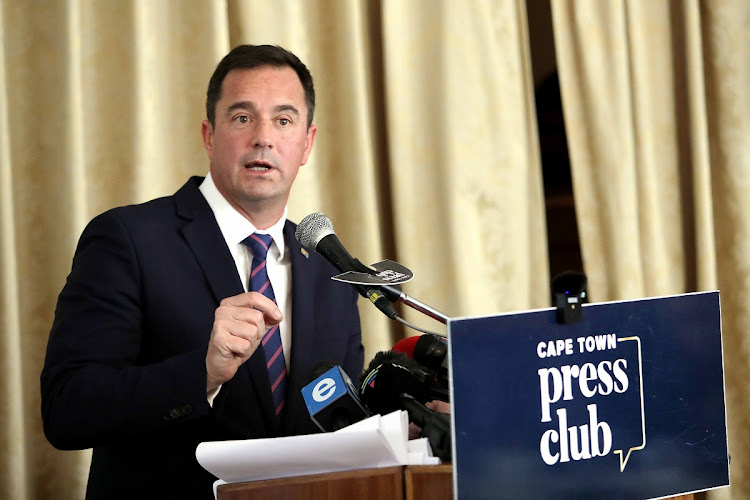 Newly elected DA parliamentary leader John Steenhuisen announced on Monday that he would put himself forward as a candidate for both interim leader and party leader.

Steenhuisen said he hoped the party would turn its back on the race obsession of the past in its selection of its next leader. The best person for the job must be chosen and he felt he had something to contribute to the party’s future.

In an address at a Cape Town Press Club function on Monday Steenhuisen acknowledged that the DA had been through a tumultuous few weeks with the departure of former DA leader Mmusi Maimane, federal chair Athol Trollip and Johannesburg mayor Herman Mashaba.

But he insisted that it was too early to write off the DA as it remained the only vehicle for democratic change in SA, though he conceded that the vehicle needed attention.

He said the DA needed to clearly define its policies at its policy congress early in 2020. It needed to come up with a new policy on empowerment because the government’s policies of BBBEE and affirmative action had not worked.

“We have to have a compelling policy offer,” he said, that clearly differentiated the DA from the ANC.

Steenhuisen admitted that race is a proxy for disadvantage in SA as the majority of people who lack opportunities are black. However, race was not the only proxy as there were other factors that had to be taken into account.

Steenhuisen said the DA had been caught in the middle between the EFF on the left and the Freedom Front Plus on the right and was a “blue wobbly jelly” which had wobbled to the left and the right “buffeted by the political winds and the latest populist cause de jour”.

“Our task in the weeks, months and years before us is clear. We need to find our spine again,” Steenhuisen said.

He stressed that the DA stood firmly by its core values and principles at the centre of SA politics. Those principles include nonracialism and a commitment to redress and reconciliation.

There were three traps that had to be avoided, one of which was lurching to the right to win back conservative voters. This would leave the DA as a fringe party of minorities. The other trap was a lurch to the left by becoming a more social democratic party along the lines of the ANC.

The third trap was to stand still with a business-as-usual approach in the face of an election result that saw the DA losing thousands of supporters. This would lead to stagnation and decline.

“The DA needs to become an iron fortress that stands in the centre.”

The party had to keep the project of nonracialism alive, which did not mean being blind to the pervasive and glaring poverty in the country. It was imperative that there be redress to the consequences of racial discrimination, he said.

“Now is not the time for jelly: now is the time for clear blue water” that clearly distinguishes the DA from other parties, Steenhuisen said.

CAROL PATON: DA will survive but nonracialism has been dealt a deadly blow

JUSTICE MALALA: Like many before him, Mmusi Maimane found a worm in the DA apple

Herman Mashaba: ‘I am not a hypocrite’

CAROL PATON: DA will survive but nonracialism has been dealt a deadly blow

JUSTICE MALALA: Like many before him, Mmusi Maimane found a worm in the DA apple

Herman Mashaba: ‘I am not a hypocrite’