The president says between July and September, the SA Revenue Service conducted 2,500 raids targeting counterfeit goods including clothing and footwear 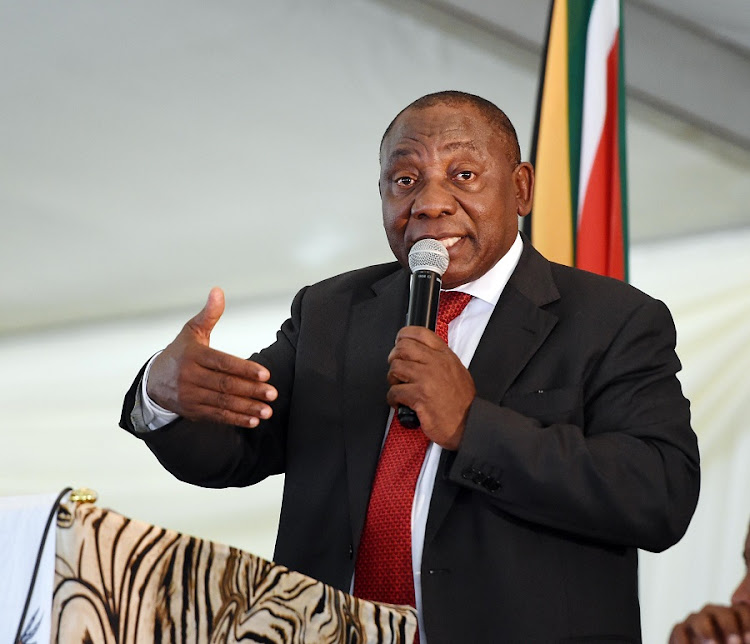 The SA government has met officials from China to raise serious concerns over illegal counterfeit goods coming into the country from the world's second-largest economy, President Cyril Ramaphosa said.

Ramaphosa said the counterfeit goods were strangling the embattled local economy, which the SA Reserve Bank expects to only grow by 0.6% in 2019. The unemployment rate jumped from 27.6% to 29% in the second quarter.

Addressing the SA Clothing and  Textile Workers' Union congress in Durban on Monday, Ramaphosa said the department of trade and industry recently met Chinese ambassador Lin Songtian to discuss the issue of “illicit goods” from his country.

He said illicit goods destroyed jobs and that between July and September the SA Revenue Service conducted 2,500 raids targeting counterfeit goods including clothing, textile, footwear and leather, which had a value of more than R1bn. Ramaphosa said they would encourage all government departments and institutions to buy locally-produced goods.

On August 1, a video went viral of vendors attacking police officers who had confiscated counterfeit goods in the Johannesburg CBD.

The police, together with police minister Bheki Cele and Gauteng premier David Makhura, among other politicians, later returned to the CBD where more counterfeit goods were confiscated, and hundreds of illegal foreign nationals were arrested.

The issue of Chinese goods has been felt in international markets too, with the world's largest economy, the US, also at odds with the Asian country over cheap imports.

Earlier in September, finance minister Tito Mboweni called for a quick resolution to the trade tension raging between the world’s two biggest economies, US and China.

“The issue of trade tension is a very important one for us ... the message must get through especially to those in Washington that the trade war is not helpful to us or to the global economy. The quicker these issues are dealt with, the better.”

In December 2015, SA and China signed 25 agreements worth  $16.5bn during the Forum on China-Africa Co-operation event held in Johannesburg.

In July 2018, China announced plans to invest $15bn into the local economy.

Ramaphosa said workers needed to be represented in the boards of companies they worked for, in line with what was already happening in developed countries.

“We shouldn't be afraid to seat there with the bosses to determine where our companies are going to. [Union] leaders have been afraid [to do so] thinking they are going to be contaminated,” he said.

He called on unions to peruse company plans and scrutinise financials in order to determine the direction their companies should take.

“In Germany, militant trade unions sit on the board of companies they work for and when they negotiate they never get into a conflict situation,” the president said.

He called on workers and employers to work hard and meet each other halfway and appreciate “where each is coming from”.

Ramaphosa said the government would deal with corruption quite ruthlessly in order to reposition SA to become a modern and capable state.

The social transformation would require, among other things, a detailed focus on the crucial education and health sectors, he said, adding they wanted to build more homes, and a modern, integrated and reliable transport system.

“We know you pay a lot of money to get to work, we now need to transform our transport sector to be more affordable and reliable.”

Meanwhile, Metrobus drivers, mechanics and admin staff — who are members of the Democratic Municipal and Allied Workers Union of SA (Demawusa) — embarked on a strike in Johannesburg on Monday.

It was in support of their demands that they be paid according to their experience and for offices at the company’s bus depots.

Metrobus spokesperson Goodwill Shiburi said they transported more than 30,000 passengers a day and that more than 80% had been affected by the industrial action, which was set to continue on Tuesday, according to Demawusa spokesperson Dion Makhura.

Fake medicines kill tens of thousands of Africans each year

Sometimes toxic, they are much cheaper than the imported pharmaceuticals offered by chemists
World
2 years ago
Next Article

Welcome to centre of Africa’s shopping

Welcome to centre of Africa’s shopping