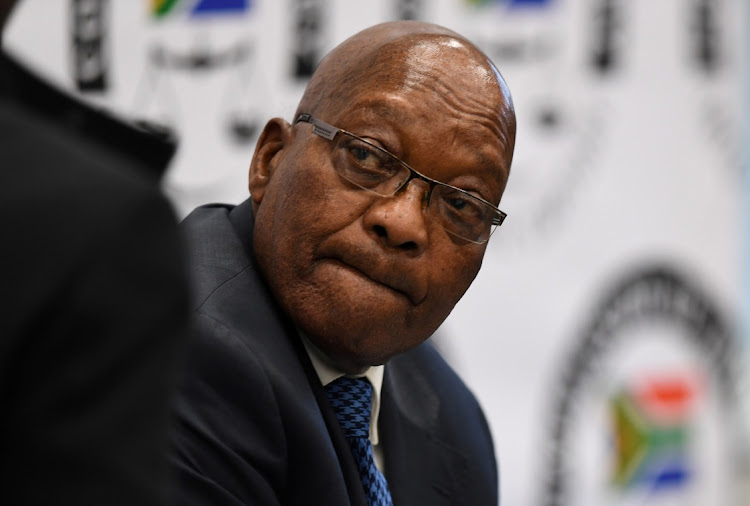 Former SA president Jacob Zuma appears before the Commission of Inquiry into State Capture in Johannesburg, on July 16 2019. Picture: REUTERS

A government official has accused former president Jacob Zuma of lying to the state capture inquiry.

Former chief director in the office of the minister in the presidency, Brent Adrian Simons, who appeared before the commission on Monday, said Zuma lied when he testified that he did not instruct then minister Collins Chabane to axe government communication and information system (GCIS) boss, Themba Maseko, in 2011.

Maseko, one of the first people to testify before the commission last year, alleged Zuma had instructed him to help the Gupta family in 2010. After numerous attempts by the well-connected family to meet him, Maseko said he yielded to their request.

On the day he was due to meet them, Zuma is alleged to have instructed him, in a phone call, the help the family.

Maseko said that at the meeting, one of the Gupta brothers ordered him to direct the GCIS’s entire R600m media advertising budget to the family’s media interests.

When he refused, he was sacked by Chabane. Maseko told the commission that the then minister told him he was acting on Zuma’s instruction.

When Zuma testified at the commission earlier this year, he said Chabane was name-dropping when he told Maseko he was acting on the former president’s instructions.

“I developed a very good relationship with the minister. He would often open up and have deep discussions. He knew I was an active member of the ANC at that stage so we would have political discussions as well,” Simons said.

“One of the discussions we had with the minister was that he touched on the issue [of Maseko] because he knew I came from GCIS. He thought GCIS was not moving in the right direction.”

Simons said Zuma was “not truthful”.

“When the former president said the minister was name-dropping, that is totally contradictory to the character of the minister,” he said.

“I thought the former president was not truthful when he, in front of the commission and in front of  citizens, said the minister was name-dropping.”

Simons said in March 2014, during an official visit to Australia, Chabane told him about the incident.

“What he indicated was that the president had instructed him to get rid of Maseko. We had a discussion and his views were that, at that stage, he thought GCIS was functioning optimally. And Maseko was giving excellent leadership at that stage,” Simons said.

“He said the former president was saying to him very directly that Maseko had to be replaced. He [Zuma] mentioned the name of [former GCIS head Mzwanele] Manyi as well. There were members of staff who were present when that telephone call came.”

Simons headed the Western Cape division of the GCIS when Maseko was axed.

Abednigo Hlungwani, the former chief of staff in Chabane’s department, told the commission on Monday that he received a call from Zuma’s private secretary in January 2011.

“She indicated they were abroad and wanted to check with me if Chabane was with me at the time. We were at the Union Buildings on the day,” he said.

Chabane returned Hlungwani’s phone and the day continued as per normal.

“On one occasion he [Chabane] did say that we would have to move [Maseko]. I didn’t ask why, I just said okay.”

This is said to have happened less than a week after Zuma’s call.

Zuma could not recall making a call to Themba Maseko to give him instructions to ‘help’ the Gupta family, but does not dispute that he might have ...
National
2 years ago

I had no interaction with Vytjie Mentor, Jacob Zuma tells inquiry

The former president also denies that Ajay Gupta would have known about plans to reshuffle his cabinet, as he ‘was not part of government’
National
2 years ago
Next Article

NEWS ANALYSIS: Ruling on Jacob Zuma’s tweet could be a landmark decision

Derek Hanekom is pleased to have helped remove Zuma, but that doesn’t mean he’s ...

GENEVIEVE QUINTAL: Jacob Zuma is not the only one who should be called to ...

NEWS ANALYSIS: Ruling on Jacob Zuma’s tweet could be a landmark decision

Derek Hanekom is pleased to have helped remove Zuma, but that doesn’t mean he’s ...

GENEVIEVE QUINTAL: Jacob Zuma is not the only one who should be called to ...