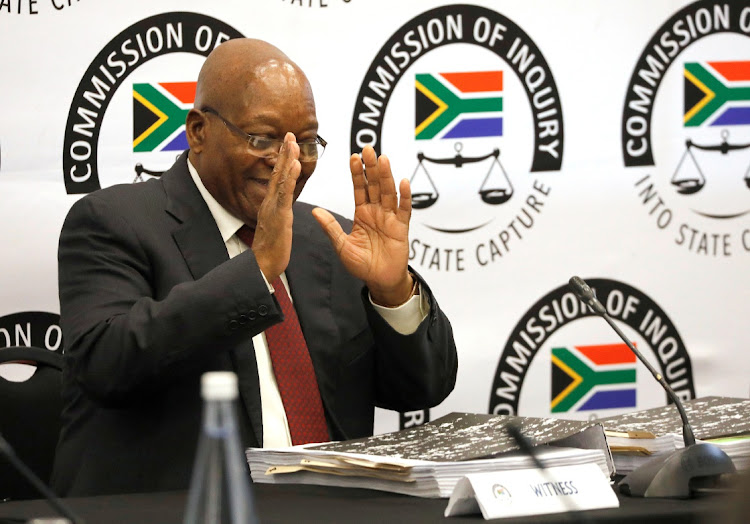 Former president Jacob Zuma oscillated between denial and diversion in his response to a slew of allegations that he facilitated the plunder of taxpayers’ money during his disastrous nine-year rule.

Over three days of rambling testimony at the state-capture commission of inquiry, Zuma said he was the victim of a conspiracy by intelligence agencies intent on ousting him, called his former mines minister and an ex-head of the army apartheid-era spies, and threatened to expose other detractors. While denying wrongdoing, he appears unable or unwilling to refute mounting evidence that he was a kingpin behind state capture.

The performance has discredited Zuma in the eyes of the public and the ruling ANC, according to Ben Turok, a veteran ANC member and former MP. The former president made himself vulnerable to criticism by attacking some of the party’s senior leaders who had intricate knowledge of his past indiscretions, Turok said.

Zuma’s marginalisation should all work to the benefit of his successor, Cyril Ramaphosa, who’s been battling to cement his control of the ANC after winning a party-leadership contest by the narrowest of margins in 2017.

“You have a sense that there is paranoia at work rather than a reasoned explanation of events,” Turok said. “Anything that is bad for Zuma is better for Ramaphosa. There has to be a transition, a weaning away of loyalty from Zuma to Ramaphosa.”

The ANC’s former head of intelligence, Zuma won control of the party in 2007 with the backing of its youth league and union allies. He shored up his support with populist promises to redistribute land and give the black majority a bigger stake in the economy.

His rule was characterised by policy missteps, inappropriate appointments and rampant corruption — former finance minister and current minister of public enterprises Pravin Gordhan estimates more than R100bn may have been stolen. Zuma’s presidency came to an abrupt end in February 2018, when the ANC forced him to quit to stem a loss of support.

Zuma remains a thorn in Ramaphosa’s side because his allies continue to occupy several key posts in the government. They’ve frustrated the new administration’s efforts to tackle corruption, pare down the size of the cabinet, revive economic growth and attract $100bn of new investment.

But Zuma faces mounting problems of his own. Besides being a main focus of the commission’s hearing, he faces charges that he took bribes from arms dealers in the late 1990s and his popular support appears to be waning. A rally outside the inquiry on Monday drew just a few hundred of his backers and their numbers dwindled to less than 50 by Tuesday.

ANC secretary-general Ace Magashule, who has emerged at the forefront of an anti-Ramaphosa faction within the party since Zuma’s exit, is the only senior serving leader to attend the hearings.

“Zuma is trying by all means to remain relevant in the active politics of the ANC as a strategy to fight accusations of corruption and state capture,” said Mpumelelo Mkhabela, an independent political analyst. “With the exception of the declining crowd around him, few believe what he says at the commission.”

Zuma was escorted into the hearings by a team of security guards and was greeted with cheers and applause from a handful of his supporters in the public gallery. He repeatedly cleared his throat and sipped water during his testimony, saying he’s had flu. He appeared energetic and in good spirits as he laughed and exchanged pleasantries with his lawyers and journalists.

“Zuma has been playing out this tale of international spy agencies and apartheid-era security forces conspiracies against him since 1991,” said Ronnie Kasrils, a former intelligence minister, who dismissed his testimony as farcical and disingenuous. “The fact that he is alive and well shows just how ineffective they have been.”

The judicial commission, led by deputy chief justice Raymond Zondo, doesn’t have prosecutorial powers, and any charges will have to be pursued by the police and National Prosecuting Authority (NPA). The commission has another year to complete its work.

While Zuma has been weakened, he can’t be written off as a spent force just yet, according to Turok. “There are people in the ANC, whether they believe him or not, who nevertheless feel that they have some allegiance to him,”

This contradicts Barbara Hogan’s testimony that Siyabonga Gama was Zuma’s ‘only choice’, despite Gama facing disciplinary charges
National
2 years ago

On Monday, throngs of Zuma supporters including school pupils and MKMVA members sang pro-Zuma songs and danced
National
2 years ago