I have been linking the dots in the conspiracy against me, Jacob Zuma tells inquiry 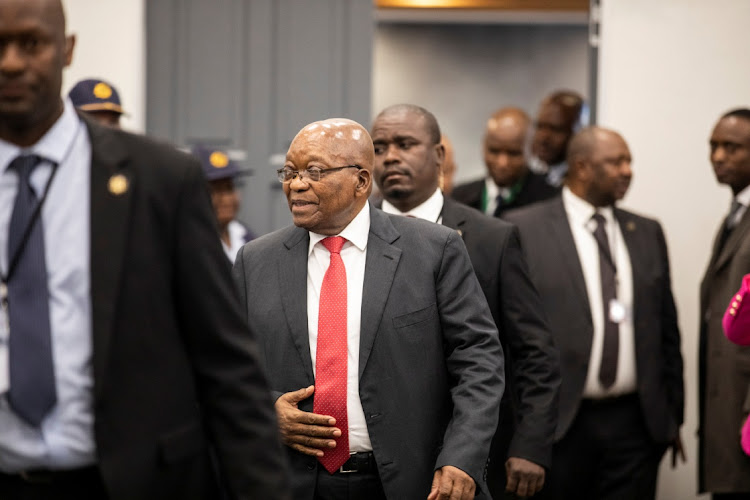 Former president Jacob Zuma arrives to appear before the commission of inquiry into state capture in Johannesburg on July 15 2019. REUTERS/WIKUS DE WET

Former president Jacob Zuma says he has been connecting the dots in the conspiracy to discredit him, including moves by intelligence structures in SA and internationally.

Without mentioning any names, Zuma alleged at the state capture inquiry on Monday that there were spies within the ANC that were working with intelligence organisations to remove him.

This is not the first time Zuma has accused his political opponents of using corruption charges against him to remove him. He has made a similar argument in the graft charges he faces relating to the multi-billion rand arms deal.

Zuma took the commission back to 1990 when the ANC was unbanned. He said as chief of intelligence for the party he had managed to find out that there were three intelligence organisations — two from big countries and one from SA — that were part of the apartheid regime, which were working to silence him.

He said the reason they wanted to remove him then already was because he had information that there were spies in the ANC who these intelligence organisations wanted to nurture and ensure that they eventually led the party.

Zuma said he realised in 1991 that there were spies in the ANC, when the first national working committee meeting after the party’s conference where Nelson Mandela was elected president, took the decision to remove him as chief of intelligence.

“It was confirming that there may be spies here,” he said.

Zuma said that he believed the same thing was happening with the state capture inquiry. He said the plan to establish the commission was no different.

"I do not want to talk about intelligence… Should we reach that point because for a number of reasons we have been very careful not to play to that ground because it has been sensitive, but I have been provoked and provoked to the last degree," Zuma said.

“Anything that happened since that time, I have been linking the dots all the time,”  he said.

"Perhaps I am a soldier and can take all of this. People forget that I have a family who would not want to hear lies talked about me. Some of my children have suffered because of me."

The former president has asked to give his own address before he is asked questions by the commission's evidence leaders. That will be followed by the testimony of nine witnesses — including current and former ministers Pravin Gordhan, Fikile Mbalula, Barbara Hogan and Ngoako Ramatlhodi — which the inquiry believes implicates him in alleged state capture.

Zuma has made it clear before that he does not believe there has been state capture, and that the inquiry, which he set up, is politicised
National
2 years ago

Jacob Zuma could out his accusers at inquiry

Five days have been set aside for former president, but it is unlikely he will answer any questions
National
2 years ago

I was targeted because I had information on ANC spies, Jacob Zuma says

‘This conspiracy against me has … come in different forms,’ the former president said at the Zondo commission of inquiry
National
2 years ago
Next Article