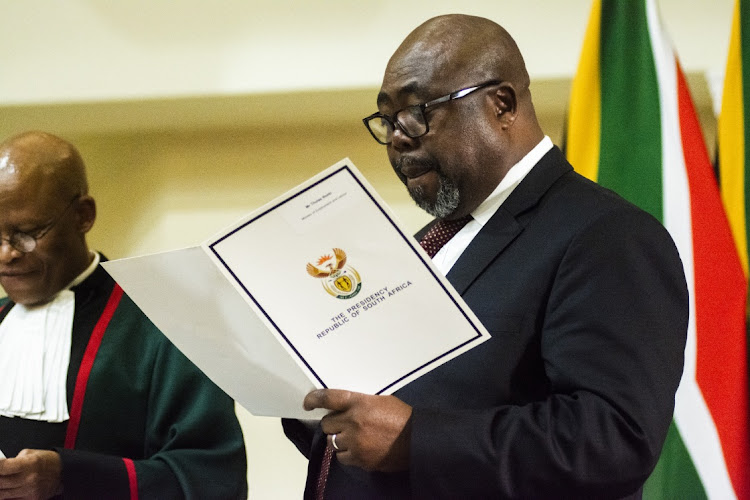 Employment and labour minister Thulas Nxesi at the swearing-in ceremony in Pretoria, May 30 2019. Picture: BLOOMBERG/WALDO SWIEGERS

“Prophesies” that there would be wholesale retrenchments after the introduction of the national minimum wage this year did not come to fruition , employment and labour minister Thulas Nxesi said on Wednesday.

SA’s unemployment rate is at record highs after it increased to 27.6% in the first quarter of 2019. Some analysts and lobby groups feared that the implementation of the national minimum wage, which kicked in on January 1, would lead to job losses.

“Prophesies that wholesale retrenchments would follow the introduction of a national minimum wage were not borne out. An expected massive spike in Commission for Conciliation, Mediation and Arbitration (CCMA) cases has not occurred,” Nxesi said during his department’s budget vote in parliament on Wednesday.

The CCMA is a labour department entity responsible for dispute resolution between employees and employers. It previously said it expected its caseload to increase by up to 15% as a result of national minimum wage-related disputes.

Nxesi said that the R20 per hour minimum was not enough to lift people out of poverty, but was an important start, adding that indications were that some 6-million workers would benefit from the national minimum wage.

“Inspections to date indicate a high compliance rate with only 7% of employers failing to pay the prescribed rate,” Nxesi said. He added that the National Minimum Wage Commission would publish research it has on employment, poverty levels and wage differentials by the end of September.

Nxesi said that despite carrying out 167,000 inspections on compliance in the current year, the department did not have an adequate number of inspectors to reach every workplace and relied on shop stewards and the public to be their eyes and ears.

Two hundred inspectors will be added during the 2019/2020 financial year to ensure the implementation of the national minimum wage.

Cosatu president Zingiswa Losi said the employment of 200 more inspectors in the department of labour, and 500 more in occupational safety is a “good start”. However, inspectors should not only meet with employers but also the employees and the relevant unions to determine what “checks out”, she said.

Losi said that following up on transgressions is key, and there should be penalties for people who don’t comply with legislation, as, in the absence of naming and shaming, there are “no consequences”.

“We believe there should be consequences from the department of labour on employers in terms of non-conformity of the law,” she said.

Nxesi also said on Wednesday that the Equity Employment Amendment Bill will be prioritised for tabling in parliament. The bill will regulate the setting of sector-specific employment targets to address the “gross under-representation” of blacks, women, and persons with disabilities.

The bill will also ensure that an employment equity certificate of compliance becomes a pre-condition for access to state contracts.

The economy is on the ropes and unless the new cabinet goes the extra mile, the country will be lucky to achieve 1% growth in 2019
Opinion
1 year ago

In a country with unemployment at 27%, what was the government thinking?
Opinion
1 year ago
Next Article