Waste-pickers are key to SA's economy, and collect as much as 80% of post-consumer packaging and paper material 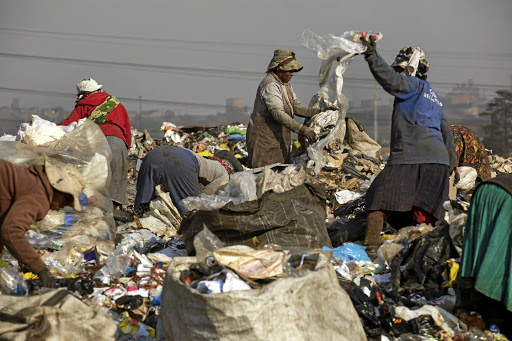 Luyanda Hlatshwayo wakes up at 4am in the abandoned inner-city school building with shattered windows he calls home.

He stuffs a pair of worker’s gloves in his pocket and rides a warehouse trolley like a giant skateboard to a suburb of SA's economic metropolis, Johannesburg: It’s garbage collection day.

The 35-year-old university dropout often makes the 8km trip on an empty stomach — he can only afford to eat twice a day. Time is precious because he must salvage as many recyclables as possible — tin cans, plastic bottles, cardboard boxes — before the city garbage trucks arrive.

“You gotta go early to beat the traffic,” Hlatshwayo said as he lifted up a pizza box to shake out crusts and cigarette butts.

“What people don’t realise is that we’re subsidising the city and its residents. If we don’t go to work, they’d be short on trucks to collect all the garbage.”

Hlatshwayo is one of an estimated 6,000 waste-pickers in Johannesburg who live off other people’s garbage in what the World Bank calls the most unequal country on earth.

With the legacy of apartheid, inequality remains so ingrained that the ANC hasn’t been able to narrow the wealth gap since taking power 25 years ago. It remains one of the biggest challenges President Cyril Ramaphosa, a multimillionaire, faces as he prepares to start a new term after the ANC won the May 8 general elections.

“What the ANC seems to be putting on the table is a mixed economic approach: creating a more business-friendly environment and being more open to foreign investors, while the other part is that the state does intervene by giving assistance when needed,” said Collette Schulz-Herzenberg, a political scientist at Stellenbosch University.

“But it’s had mixed results in that regard, and it’s really facing a big challenge.” CEOs and top lawyers make as much as R20m a year while the official minimum wage is R20 an hour.

SA has the most millionaires and billionaires of any sub-Saharan African nation, and that number is expected to rise significantly in the next eight years, according to Mauritius-based AfrAsia Bank.

At the same time, almost half of the population of 55-million is considered chronically poor. While the ANC government has lifted more than two million people out of poverty, improved access to basic services and rolled out an impressive social-assistance program, SA's high unemployment rate, currently at 27%, remains the single biggest obstacle to helping the poor, according to the World Bank.

“Even so, the level of inequality and poverty in SA after taxes and spending remains unacceptably high.”

The contrast between rich and poor is particularly striking in Cape Town, one of the world’s top tourist destinations, and Johannesburg, a sprawling city built by migrants that’s home to no less than 20 top-ranked golf courses and about 19,000 dollar millionaires, almost half the country’s total number of high- income individuals.

Porsches and Maseratis are a common sight, as are opulent mansions. Residents ask for referrals for cosmetic surgeons and dog acupuncturists on Facebook groups or flock to the latest French patisserie in luxury shopping malls—all testimony to $276bn in household wealth, more than the GDP of Finland, that AfrAsia Bank says has accumulated here.

On the other side of the divide are people like Hlatshwayo, who was forced to quit his banking studies when his family’s funds ran out and he left a job as a kitchen manager because working conditions were unhealthy.

Known locally as a trolley-pusher, Hlatshwayo, who speaks five languages, now sits at the very bottom of an army of black workers who fan out daily over the city’s tree-lined neighbourhoods to service the rich.

Shortly after his arrival, gardeners, dog-walkers, security guards and maids with white aprons emerge too, sweeping leaves or wheeling out the bins.

“There’s a tremendous stigmatisation around being a reclaimer, but they are solving our waste problem and created their own jobs in the context of unemployment,” said University of the Witwatersrand academic Melanie Samson.

“It’s an informal form of wealth redistribution that’s a response to inadequate government policy. Many reclaimers choose this work as preferable to being domestic workers, construction workers or gardeners, where they lose control over their time and can be subjected to racism and abuse by employers.”

Waste-pickers are also key to the local economy: They collect as much as 80% of post-consumer packaging and paper material, making SA's recycling rate equivalent to that of some Western European countries.

Municipalities save up to R750m a year in landfill costs, Samson said, citing industry data.

While many wear balaclavas to avoid recognition, Hlatshwayo isn’t ashamed of what he does. He calls it “a back-up plan”. He’s part of an association that’s registering all the waste-pickers in the city and helped organise a march earlier in May to demand the municipality halt any plans to hire private recycling companies.

Yet he’s cynical about government, and didn’t bother to vote.

“I actually put on my Facebook a few days back: ‘I think I’m a socialist’,” he said cheerfully.

“The people who died for our freedom, I don’t think they would do it again. This freedom is only benefiting a very select few.”

Once Hlatshwayo is back at the school where he lives with about 300 other waste-pickers, he and three colleagues start separating the recyclables. Lunch consists of strips of grilled meat while they quickly fill seven man-sized bags, some so heavy they require three people to lift them on a trolley. They don’t sit down once.

“Tym is money” is spray-painted on one of the school yard’s walls.

The four men then make their way to the nearest recycling centre, pushing and pulling their cargo through heavy traffic. Almost 30 others are already standing in line, waiting for a small gate to open before they can weigh their bags and throw the contents in containers.

At last, by 6pm, it’s the turn of Hlatshwayo and his friends. They get R958, to be shared by four people, after a 14-hour day outdoors.

“My mother loves the fact that I’m not doing crime,” Hlatshwayo said.

“You never know where life is going to take you.”

So long, and thanks for all the fish

Plastic is not only being found in fish; it is polluting some of the most remote regions in the world, writes Sanet Oberholzer
Life
2 years ago

Apple lab to use robots to destroy devices for recycling materials

LETTER: Being sensible about plastics

LETTER: Disposal of plastics is the real problem

LETTER: Being sensible about plastics

LETTER: Disposal of plastics is the real problem