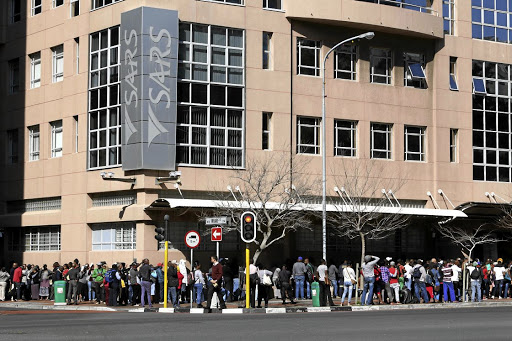 SA Revenue Service (Sars) employees are expected to continue with their strike on Monday. The third day of the strike coincides with the release of the preliminary results of revenue collection for 2018/2019, with expected revenue revised downwards during finance minister Tito Mboweni’s 2019 budget address.

The strike has affected the tax agency’s contact centres, walk-in branches and to some extent on ports of entry into SA. The strike, the first in a decade at the tax agency, started on Thursday as a result of a deadlock in wage negotiations between Sars and the National Education, Health and Allied Workers’ Union (Nehawu) and the Public Servants Association (PSA), which collectively represent almost 10,000 workers at the Sars bargaining council.

The significant issue in the deadlock relates to the term the wage increases are negotiated for. Unions are pushing for a single term increase to allow for new negotiations in 2020, while Sars’s offer last week for an 8% increase in a multi-term agreement was rejected.

The unions demanded, among other benefits, an 11.4% increase for a one-year term, but would be willing to take an 8% offer for that term to members.

Nehawu said on Sunday, following a meeting with its national bargaining forum at Sars, that a decision had been taken to continue with the strike. It would also receive a mandate from its members in relation to the negotiations.

“The union will from here on intensify the strike to ensure our members and workers’ demands are met by the employer,” Nehawu’s secretariat said on Sunday.

Nehawu added that it was “in the best interest of the employer to ensure the speedily resolution of the current impasse”.

“Workers have been patient for far too long and the patience has run thin.”

It was unclear whether the PSA would embark on strike action with Nehawu on Monday.

Amid the continuing labour unrest, Sars and the unions continued negotiations over the weekend. Stefan Viljoen, labour relations officer for fromthe PSA, said meetings were held on Friday evening as well as one on as Sunday afternoon in a bid to resolve the impasse.

Meanwhile the Small Business Institute (SBI) on Sunday appealed to workers’ representatives and Sars’s leadership to “urgently” resolve their wage dispute, which it said was threatening small businesses in SA.

“The strike, which is entering its second week, is the latest blow on small business, which is still reeling from weeks of load-shedding. Small business is already saddled with the burden of regulatory compliance. They cannot afford more delays occasioned by the industrial action,” said Bernard Swanepoel, the SBI’s executive director.

The SBI said all parties must place the interests of all South Africans ahead of their own.

“Already, South Africans have had to bear the cost of the historic increase last year in Value Added Tax and, in all likelihood, [acting Sars commissioner] Mark Kingon will be reporting another revenue shortfall,” Swanepoel said.

VAT was increased during the budget address last year, and the increase was blamed on the revenue shortfall at Sars.  the tax agency.

ECONOMIC WEEK AHEAD: Sars revenue figures in the spotlight
Next Article