If the drought persists, farmers may be in for an even rougher ride in 2019 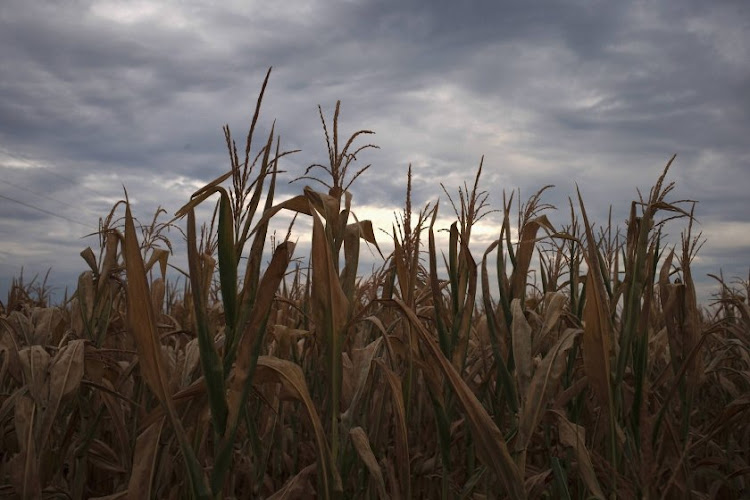 SA is likely to miss forecasts for maize output this year because dry weather has delayed plantings, and possible frost at the end of the season may hurt the crop, the Agricultural Business Chamber said.

The chamber had estimated production for the 2018-19 season at 12.2 million tons. Late summer rains in the Free State and North West provinces mean farmers planted after the optimal window to sow closed in mid-December, it said on Monday.

By January 11, 60% of the intended area for the North West was planted and the figure was 70% for the Free State, while other regions managed to plant typical areas, the chamber said.

That suggests that the intended area of 2.44 million hectares for corn in the season could probably fall by about 19% to 1.98 million hectares, said Wandile Sihlobo, the head of agribusiness research at the chamber.

“This would be almost in line with the area planted during the drought period of the 2015-16 production year. At that time, SA maize production amounted to 7.8 million tons, turning the country into a net importer, as annual maize consumption is roughly 10.8 million tons,” he said.

SA is Africa’s top maize producer, but profitability has been squeezed as a record crop in 2016-17 that boosted stockpiles was followed by another good harvest.

Rainfall in 2015 was the lowest since records began a century earlier because of El Niño, with many cities experiencing their highest temperatures on record and Cape Town is still recovering from its worst drought ever.

The dry weather conditions raise the spectre of a drought that could be worse than the one in 2016, Jannie de Villiers, CEO of Grain SA, a farmers’ lobby group, said last month.

“Some of the scenarios we are facing look even grimmer than the previous drought,” De Villiers said. “If we consider the current crop status planted, late plantings or even no plantings, the farmers and SA are in for a very rough ride in 2019.”

Fuel ethanol made from sugarcane — a lot of which SA exports unprofitably — will revitalise the sugar industry, create jobs and reduce greenhouse gas ...
Opinion
2 years ago

On the drive from Pretoria to the Eastern Cape, it was evident that the drought was not over, with several areas yet to be planted
Opinion
2 years ago
Next Article