Good news — and numbers — in battle against rhino poaching

This comes despite a rise in poaching activity inside the Kruger‚ including sightings and incursions, with 1‚873 incidents recorded this year 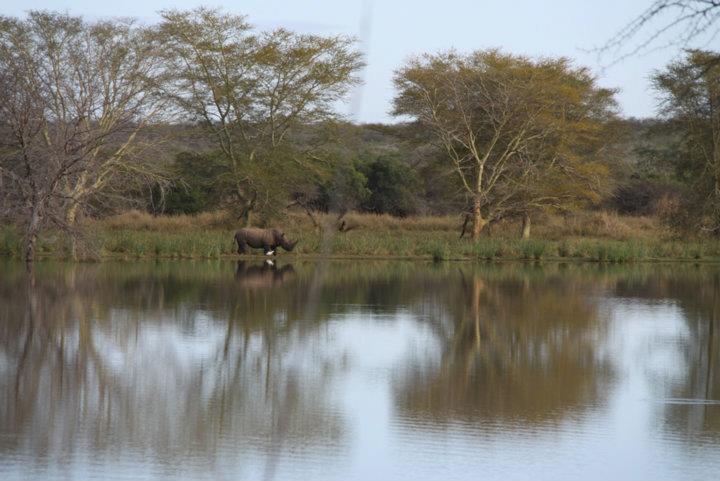 A rhino on the bank of the Mkuze river in KwaZulu-Natal. Picture: DELIA ROBERTSON

There has been a significant drop in the numbers of rhino poached across the country.

According to department of environmental affairs statement on Friday‚ a day before World Rhino Day‚ there were “dramatic declines” in the number of rhino poached between January to August this year in nearly all provinces.

Departmental spokesperson Albi Modise says 508 rhinos were poached in the eight-month period this year compared to 691 over the same period in 2017. “Rhino poaching numbers in the Kruger National Park also continue to decline. In the period under review‚ a total of 292 rhino were poached‚ compared to 332 in the same period last year."

This comes despite a rise in poaching activity inside the Kruger‚ including sightings and incursions with poachers. This year, 1‚873 incidents were recorded compared to 1‚702 in 2017. 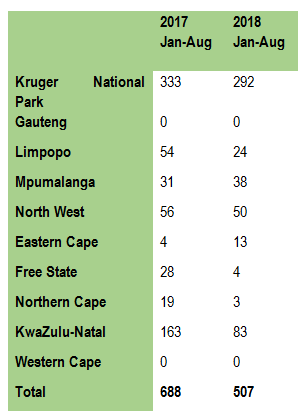 The number of rhinos poached in SA between January and August in 2017 and 2018. Picture: DEPARTMENT OF ENVIRONMENTAL AFFAIRS

The department says about 400 people have been arrested on various charges‚ including rhino poaching‚ since the start of the year. This includes the arrest of 13 wildlife traffickers — eight South Africans and five Chinese — as they were heading towards China and Vietnam.

Since the start of the year, 162 alleged poachers were arrested‚ 83 rhino horns confiscated, and 145 weapons seized in the Kruger.

But he says there are still concerns over the delay in the time it takes for cases to get to trial‚ saying that traffickers have time to hide or dispose of their proceeds due to these delays. “A welcome development is that a number of rhino poaching-related cases are now being dealt with by the National Prosecuting Authority’s Asset Forfeiture Unit‚” he says.

Modise says 530 rhino poaching-related cases are on court rolls across the country‚ involving 750 accused and 1‚738 charges.  “From January to August 2018 a total of 70 cases‚ involving 163 accused were finalised. The trials have resulted in 93% guilty verdicts‚ translating to 288 years in sentencing.”

SANParks has 63 south-central and 199 south-western black rhino in their rhino parks. There were between 427 to 586 black rhinos in the Kruger last year.

“White rhino numbers in the park‚ however‚ continue to decline‚ with the population estimated at between 4‚759 and 5‚532 individuals during 2017. White rhino‚ unlike black rhino‚ were affected by the drought, with natural mortalities increasing from 1% to 1.5% during the drought‚ while the birth rate dropped from approximately 9% to 5% one year after the drought.”

SA has exported 538 live rhino since 2014 as part of the requirements of the Convention for the International Trade in Endangered Species of Wild Fauna and Flora (CITES). Most, 361, were exported to former range states‚ including Botswana‚ Chad‚ Namibia‚ Rwanda and Zambia for zoological purposes and for re-introduction to range states.

Since the Constitutional Court lifted the moratorium on the domestic trade of rhino horn‚ 28 trade permits have been issued. Says Modise: “In terms of the permits issued‚ 12 were granted for the sale of 1‚219 rhino horn‚ while permits were granted to 16 buyers.”

SA is home to about 20,000 rhinos and despite recent setbacks, the Kruger National Park says it is making progress in the battle against poaching
National
2 years ago

Poachers will wipe out SA’s elephants next