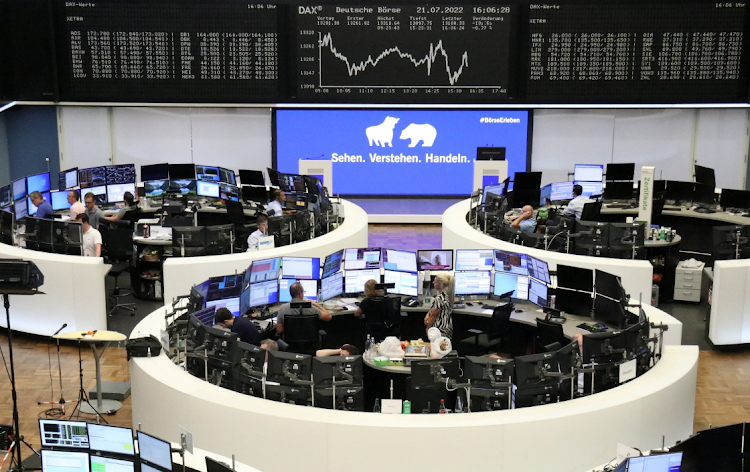 London — World shares consolidated a six-week high on Thursday as investors scented a possible slowdown in the pace of US rate hikes that had comforted bond markets and sent the dollar to a three-week low on the yen.

Europe made an upbeat start as record-busting $11.5bn profits from oil giant Shell sent commodities shares soaring, though momentum quickly faded ahead of what was expected to be some shaky eurozone confidence data later.

The US Federal Reserve had surprised no-one by lifting rates 75 basis points (bps) to 2.25%-2.50% on Wednesday, but did alter its statement to cite some softening in recent data.

Fed chair Jerome Powell sounded suitably hawkish on curbing inflation in his news conference, but also dropped guidance on the size of the next rate rise and noted that “at some point” it would be appropriate to slow down.

“There is pretty convincing risk-on reaction from the market to the Fed, but whether that can continue remains to be seen,” said Abrdn investment director James Athey.

The reality was, he said, that if the US central bank does slow its rate hikes it would only be because the economy was struggling, which would not be a good sign.

“The bias is we don’t see much more on the upside [in share markets] given that there is recessionary outlook,” Athey said. “Everybody is somewhere on the spectrum.”

The futures market still has 100bps of further tightening priced in by year-end, but also implies about 50bps of rate cuts over 2023.

Just the hint of a less aggressive Fed though had been enough to send MSCI’s 47-country index of world shares up 0.4%, putting it firmly on course for its first back-to-back run of weekly gains since March.

With Europe now facing a gas crisis, and increasingly likely a recession according to economists, the Stoxx 600 stalled after rising as much as 0.5%. The FTSE and DAX both slipped into the red though Italy’s FTSE MIB remained 1% higher.

In Asia, Japan’s Nikkei had added 0.4% despite a jump from the yen. South Korea climbed 0.8% though Chinese blue chips lost traction late on having been brightened earlier in the session by reports Beijing was planning more support for a hard-hit property sector.

Wall Street also looked set to take a post-Fed breather, with S&P 500 futures 0.2% lower and Nasdaq futures down 0.5%, after the tech-heavy index had enjoyed its biggest daily gain since April 2020 on Wednesday.

Yet shares of several major US tech companies, including Meta Platforms, slid after hours as poor quarterly results and outlooks underscored recession fears.

Traders will be feverishly awaiting results from iPhone maker Apple and Amazon later after torrid runs for their stock prices in 2022.

Attention will also be on US GDP data for the second quarter where another negative reading would meet the technical definition of a recession, though the US has its own method of deciding those.

Median forecasts are for growth of 0.5%, but the closely watched Atlanta Fed estimate of GDP is for a fall of 1.2%.

In bond markets, two-year treasury yields steadied at 3.00% after falling 6bps in the wake of the Fed meeting.

Though the US yield curve steepened slightly, most of it remained inverted in a sign investors believe policy tightening will lead to an economic downturn and lower inflation.

“While central banks are still on track to continue tightening this year, it is increasingly likely that the most rapid pace of rate hikes may be behind us,” analysts at JPMorgan said in a note.

Others are not so sure. Flavio Carpenzano investment director at Capital Group, which manages $2.6-trillion worth of assets, said 9% inflation in the US would remain the main concern for the Fed.

“Combining this with a labour market that remains very tight, it’s difficult to envisage the Fed can slow or justify a slower hiking pace.”

In currencies, the dollar index eased a fraction to 106.260 after losing 0.7% overnight as risk sentiment improved.

It also suffered a rare setback on the Japanese yen, falling 0.7% to ¥135.56 as some investors decided to book profits on a host of long positions.

The single currency still has an energy crisis to contend with as the International Monetary Fund (IMF) warned that a complete cut-off of Russian gas to Europe by year-end may lead to virtually zero economic growth in 2023.

Russia has delivered less gas to Europe this week and warned of further cuts to come, boosting prices for gas and oil globally. A drop in crude inventories and a rebound in petrol demand in the US also supported prices.

Spot gold was 0.6% firmer at $1,744/oz, having benefited from the dip in the dollar and bond yields.

Falling US inventories are also adding support
Markets
3 weeks ago

JSE slips ahead of US Fed’s announcement on rates

JSE slips ahead of US Fed’s announcement on rates