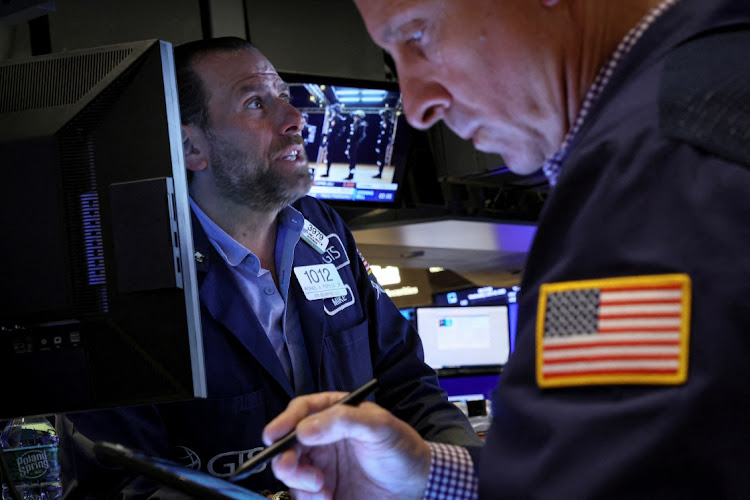 Traders work on the floor of the New York Stock Exchange in New York, US. File photo: REUTERS/BRENDAN MCDERMID

London — European shares dropped in early trading on Thursday and the safe-haven dollar was up after the latest red-hot US inflation reading increased investor caution about Federal Reserve rate hikes.

Wednesday’s data showed US consumer prices jumped 9.1% year on year in June, up from May’s 8.6% rise.

The data was seen as firming the case for the Federal Reserve to raise rates aggressively. Policymakers might consider a 100 basis point increase at the July meeting, Atlanta Federal Reserve Bank president Raphael Bostic said.

By early European trading, money markets were pricing in a 54% chance of a full percentage point hike at the July meeting and a 46% chance of a 75 basis point rise.

“The Fed probably needs to temper people’s expectations in terms of what they can do,” said Eddie Cheng, head of international multi-asset investment at Allspring Global Investments.

“In the past hiking cycle, we have observed that inflation kept rising during the hiking cycle … it takes time for the monetary policy to affect inflation.”

Cheng said that riskier assets will be the “collateral damage” in the Fed's attempts to rein in inflation.

The dollar index measuring its performance against a basket of currencies was up 0.2% at 108.43, while the dollar was up 1.1% against the yen, at its strongest since 1998.

The pound was down 0.2% at $1.1865. In the first vote to choose who will succeed Boris Johnson as Conservative party leader, former finance minister Rishi Sunak won the biggest backing from Conservative legislators.

The euro has been under pressure because of the European Central Bank lagging the Fed in ending its ultra-easy monetary policy of the past decade, as well as the economic risks from the Eurozone's dependence on Russian gas.

Italian yields rose sharply ahead of a parliamentary confidence vote that risks bringing the country’s government down.

The US 10-year yield was up about seven basis points at 2.9817%. The two-year, 10-year part of the treasury yield curve is at its most inverted it has been at any point in this cycle, according to Deutsche Bank.

Yield curve inversion — which is when short-dated interest rates are higher than longer ones — is commonly seen as an indicator that markets are anticipating a recession.

Overnight, the Monetary Authority of Singapore and the Bangko Sentral ng Pilipinas surprised markets by tightening monetary policy in off cycle moves.

Oil slips as investors focus on white hot US inflation

Equities battle after release of white hot US inflation data, which fuelled the fear the Fed will raise interest rates even more aggressively
Markets
1 month ago
Next Article