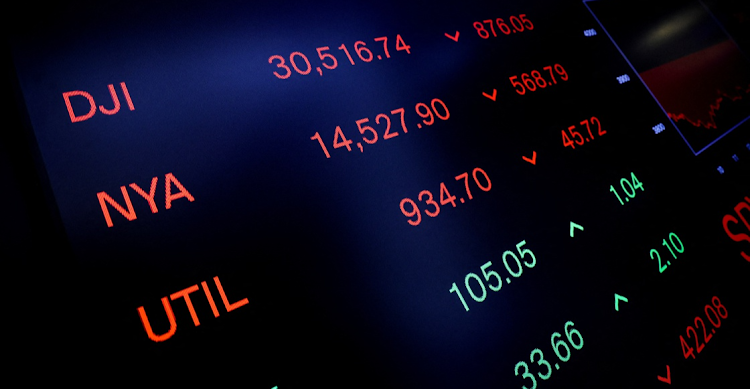 London — Chipmakers revived stock markets on Thursday, helping to soothe investor concerns about a potentially rapid recession because of looming rate hikes, while the euro struggled near a 20-year parity with the safe-haven dollar.

Sterling rose 0.6% after reports that UK Prime Minister Boris Johnson will step down in the wake of a string of ministerial resignations, after plumbing two-year lows on Wednesday amid the political uncertainty. London’s FTSE 100 gained 0.9%.

Crude oil fluctuated on either side of $100 a barrel as tight supplies and worries about demand jostled for market attention.

The Stoxx index of 600 European companies rose 1.2% to 412 points, but is still down about 16% from its record high six months ago.

The MSCI global share index was up 0.4%, having lost about a fifth of its value so far this year.

“Markets are potentially exaggerating recession risk or recession coming very rapidly,” Thozet said, adding that investors were pivoting towards utility-style companies such as pharmaceuticals, which are less sensitive to downturns.

“We are collectively buying what we need more than what we want,” Thozet said.

Elsewhere in Europe, the euro sought to claw back from its near two-decade trough against the greenback.

“The euro is in free fall and we have not heard any official from the European Central Bank commenting. It’s as if they are locked in a bunker,” Thozet said.

“It’s not just a question of recession, it’s a question of how dark it gets in Europe,” added Chris Weston, head of research at brokerage Pepperstone in Melbourne.

Unlike the Bank of England and the Federal Reserve, the ECB has yet to begin raising interest rates despite record high inflation in the eurozone, but the central bank is expected to increase rates by 25 basis points later this month.

“They could be hiking by 50 basis points and potentially they should,” Thozet said.

S&P 500 futures were up 0.4%, indicating a steady start on Wall Street later in the session.

The yield curve, measured by the gap between two and 10-year US bond yields, continued to push further into inverted territory, a sign that bond markets suspect aggressive rate hikes to tame inflation.

“The coincidence of fairly hot job market data and far more resilient ISM Services [PMI, which came in at 55.3 points in June better than the market expectation of 54.5] ... further underpins the point that the Fed is unlikely to step down the pace and intensity of tightening,” said Mizuho economist Vishnu Varathan.

“The next litmus test for the direction in yields ... will be the speeches by [St. Louis Fed president James] Bullard and [Fed Governor Christopher] Waller — who should shed more light into the thinking of the hawkish camp within the (Fed),” said NatWest Markets’ rates strategist Jan Nevruzi.

“Are they leaning into the recessionary fears or continuing to press on that the Fed has to go above neutral as quickly as possible and contain inflation no matter the cost to growth?”

Bullard Waller are both due to speak at 5pm GMT, though Friday’s US payrolls data is also keenly awaited.

Asian stocks managed gradual gains, with MSCI’s broadest index of Asia-Pacific shares outside Japan up 1% from a two-month low.

Japan’s Nikkei closed 1.47% higher, while South Korea’s Kospi gained 1.8% — its best day in nearly two weeks — with Samsung Electronics one of the biggest movers after reporting earnings guidance that suggested a rebound for its chip business.

The Australia and New Zealand dollars scraped themselves from two-year lows, gaining 0.51% and 0.54%, respectively.

US markets staged a late rally, while Asian markets are trending weaker amid jitters over the global outlook
Markets
1 month ago

With US markets closed on Monday, trading is expected to be livelier on Tuesday
Markets
1 month ago

Investors fear Beijing may one day be as cut off from global markets as Russia after its invasion of Ukraine, a risk many are hesitant to ignore
World
1 month ago
Next Article