The rouble has slumped almost 20% in less than a week 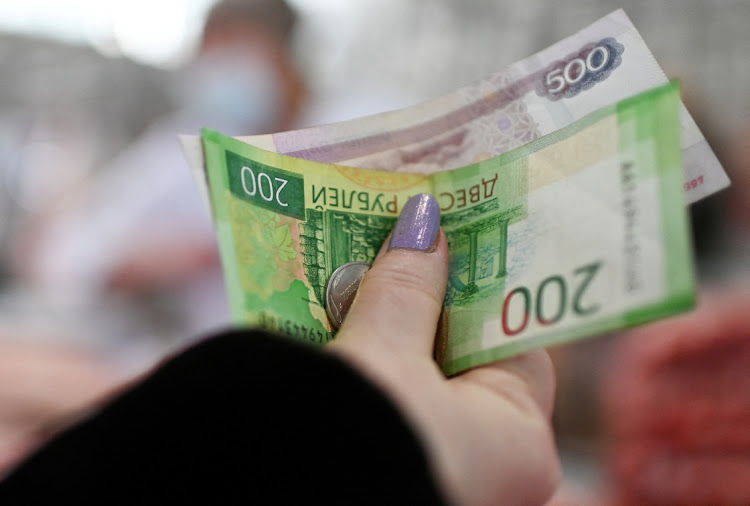 A customer hands over Russian rouble banknotes and coins to a vendor at a market in Omsk, Russia. Picture: REUTERS/ALEXEY MALGAVKO

Moscow — The rouble tumbled to its lowest in more than a month on Tuesday, past 62 to the dollar on Tuesday and at one point shedding more than 12%, while shares in aluminium producer Rusal leapt as Russian oligarch Vladimir Potanin hinted at a possible merger with Nornickel.

The rouble has slumped almost 20% in less than a week, embarking on its hefty slide soon after finance minister Anton Siluanov said Russia could turn to currency interventions to keep a lid on the rouble’s strengthening, a matter that raised concern as it dents Russia’s income from selling commodities and other goods abroad for dollars and euros.

Despite its sharp decline, the rouble is still the world’s best-performing currency in 2022, boosted by measures — including restrictions on Russian households withdrawing foreign currency savings — taken to shield Russia’s financial system from Western sanctions imposed after Moscow sent troops into Ukraine on February 24.

The rouble’s slump from last Wednesday’s more than seven-year highs is just a correction on the market, said Alor Broker in a note.

“It is too early to talk about a break in the rouble’s strengthening trend,” Alor Broker analysts wrote. “Russia’s balance of payments will continue to remain very strong, importers will not recover their positions quickly.

“Only by introducing a new budget rule can the situation on Moscow Exchange’s currency market change radically.”

Analysts have said there is little difference between 50 and 60 roubles to the dollar in terms of how critical it is for the budget. Officials prefer a rate of 70-80, they have said.

Investors are looking for clues on when Russia may intervene in the currency market. Promsvyazbank analysts said increased trading in the middle of the day, combined with the sharply weakening rouble, reflected enhanced speculation.

The central bank declined to comment on whether interventions had happened on Tuesday, while the finance ministry said it did not plan to use anticipated extra budget revenues to buy foreign currency or gold.

“We still think that such a sharp strengthening of foreign currency is linked to interventions,” said Tinkoff Investments analyst Andrei Oparin, in spite of no confirmation from the central bank or finance ministry.

The central bank can buy dollars and euros only  through non-sanctioned intermediaries, but it could buy the Chinese yuan directly, Oparin said, pointing to a 41.5% increase in the average daily trading volume of the yuan-rouble currency pair from June 29 to now, when compared with June 15-28.

The rouble lost about 10% against the yuan on Friday, more than its losses to the dollar and euro in that session. On Tuesday, it was 8.2% lower at 9.3802.

Potanin, the largest shareholder at Nornickel, said he was ready to discuss a possible merger of the mining giant with Rusal, in part as a defence against Western sanctions.

Moscow Exchange said it would resume evening trading on the derivatives market from July 12 due to high demand from clients, having introduced a raft of restrictions soon after Russia began what it calls a “special military operation” in Ukraine.