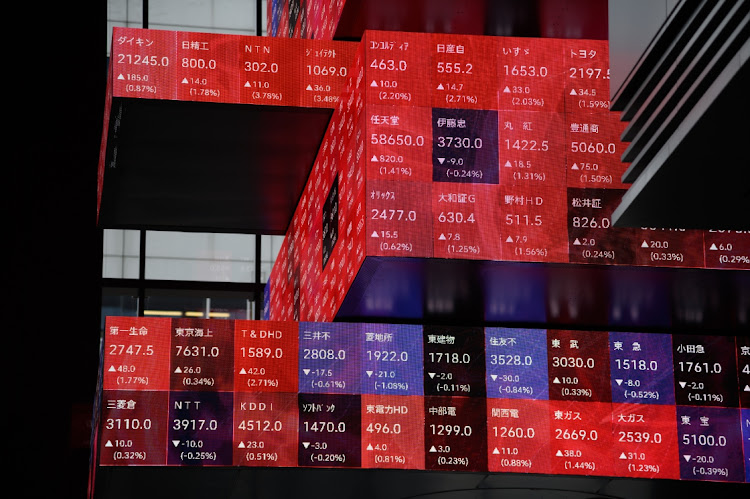 Stock figures on a rotating-cube screen in an atrium of the Kabuto One building, next the Tokyo Stock Exchange, in Tokyo, Japan, on June 7 2022. Picture: BLOOMBERG/AKIO KON

Shanghai — Asian stocks fell, US bond yields rose and a soaring dollar pushed to a two-decade high against the yen on Thursday as investors worried about the outlook for more rate rises ahead of a key meeting of the European Central Bank (ECB) later in the day.

But before the meeting, at which the ECB is set to bring to an end its asset purchase programme and signal rate hikes to combat rising inflation, moves in the Asian session were relatively muted as many investors kept to the sidelines.

“It’s classic pre-central-bank-meeting price action. To speculate now on anything other than an hourly time frame, or an intraday time frame, doesn’t make a whole lot of sense at the moment,” said Matt Simpson, senior market analyst at City Index in Sydney.

“It’s the most exciting meeting since [Christine Lagarde] has been at the helm, since Draghi was here — ‘whatever it takes’.”

Adding to concern over European inflation, data showed the eurozone economy grew much faster in the first quarter than the previous three months, despite the war in Ukraine.

As investors guess at the size and pace of ECB tightening, they are also awaiting US consumer price data on Friday that the White House has said it expects to be “elevated”. Economists expect annual inflation to be 8.3%, according to a Reuters poll.

While Asian share markets have risen around 8% from almost two-year lows touched in May, investors remain worried that central bank policy tightening to control inflation could spark an economic slowdown.

In morning trade, MSCI’s broadest index of Asia-Pacific shares outside Japan was down 0.39%, tracking losses in US stocks in the previous session.

Australian shares were down 1.19% and Seoul’s Kopsi slipped 0.64%, though Hong Kong’s Hang Seng eked out a gain of less than 0.2% and Chinese A-shares were flat.

In Japan, the Nikkei stock index was also unchanged.

“Over the past two weeks, trading has been in a very narrow range and also based on very low volumes,” analysts at ING said in a note.

“Previous instances of this range trading on low volumes have usually preceded a sharp downshift,” they cautioned, adding that the ECB meeting and Friday’s US price data were likely “catalysts for a more bearish outlook”.

The wait for US price data also weighed on US treasuries, which saw yields rise following a weak auction of 10-year notes on Wednesday.

Rising yields supported the dollar, particularly against the yen, which dropped to a 20-year low of ¥134.56. The Japanese currency has been weighed down by a widening policy divergence, with the Bank of Japan remaining one of the few global central banks to maintain a dovish stance.

Crude oil prices extended gains, rising to their highest levels in three months on hopes for strong US demand and a recovery in China as Covid-19 curbs are eased.

Sentiment remains under pressure amid a deteriorating global economic outlook, while investors speculate on interest rates
Markets
3 weeks ago