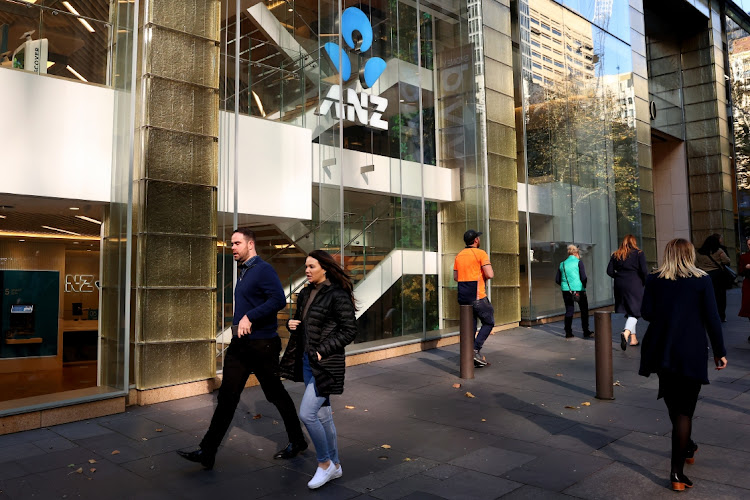 Commuters walk past an ANZ Bank branch in Martin Place, Sydney, Australia on June 07 2022. The Reserve Bank of Australia has raised the cash rate by 0.5% to 0.85%. Picture: GETTY IMAGES/BRENDON THORNE

Milan — Global stocks fell on Tuesday and bond yields dipped from recent highs as a surprise 50-basis-point rate increase in Australia raised concern about policy tightening in the lead up to US inflation data and a European Central Bank meeting this week.

The Reserve Bank of Australia (RBA) raised rates by the most in 22 years and flagged more tightening to come as it battled to restrain surging inflation, driving a brief spike in the Aussie and hitting local shares.

The MSCI’s benchmark for global stocks fell 0.3% to 650 points by 10.51am GMT, weighed down by morning losses in Europe and earlier weakness across Asian markets.

“As seen with the surprise hike in Australia, most central banks want a higher level of rates to cope with inflation. Policymakers want to have some ammunition to use in case there is a slowdown in growth,” said Enrico Vaccari, head of institutional sales at financial services firm Consultinvest.

“Markets are in a phase of uncertainty that is bound to last. A progressive increase in rates will have repercussions on volatility for equities and even more on bonds,” he added.

British Prime Minister Boris Johnson survived a no-confidence vote among his Conservative Party’s lawmakers on Monday, but the thin margin of victory raised talk of a move to replace him, hitting sterling and gilts.

“The vote casts significant doubt about his tenure as leader,” said JPMorgan economist Allan Monks. “Assuming he can buy enough time, the outcome increases the chance that fiscal policy is loosened further in an attempt to turn the situation around. If not, he could yet be forced out with the Conservatives electing a new leader [and hence prime minister],” he added.

The 10-year Treasury yield dipped 1.8 basis points in European trade after six consecutive days of gains, but remained above the key 3% threshold before data on Friday that’s expected to show still-high inflation.

A high reading could cement fears that the Federal Reserve could keep raising rates aggressively beyond the expected 50 bps increase at its policy meeting next week.

In Europe, benchmark 10-year German bund yields also dipped by about 2 bps but held near Monday’s highs ahead of the ECB meeting on Thursday that is expected to confirm rate increases are coming soon. They last traded at 1.303%.

“There’ve been a couple of catalysts behind those moves higher, but a key one over the last week-and-a-half has been the perception that near-term recession risks are fading back again, which is set to give central banks the space to continue hiking rates and thus take bond yields higher,” Deutsche Bank strategist Jim Reid said in a note.

“On top of that, the fact that recent inflation data has proven stickier than expected has also pushed yields higher, and investors are eagerly awaiting to see if we get another upside surprise from the US CPI reading out on Friday,” he added.

Meanwhile, 10-year gilt yields hit 2.265%, a seven-year high, and were last almost flat on the day, as Johnson emerged weakened from the confidence vote.

In foreign exchange markets, angst ahead of the US inflation data kept the dollar in demand. The dollar index was near a two-week high, up 0.15% on the day.

The greenback rose to the highest since 2002 against the yen and was last up 0.6% after the Bank of Japan promised support for the economy and easy monetary policy even as prices start to rise.

The Australian dollar gained as much as 0.76% just after the supersized RBA rate hike, but quickly shed gains to trade flat on the day.

The rise in US yields and the dollar sent gold to fresh one-week lows. The spot price for the precious metal later recovered and was last up 0.4% at $1,849.38 an ounce.

Consultinvest’s Vaccari said he expected a return of investor interest for gold as a safe haven hedge against risks of stagflation.