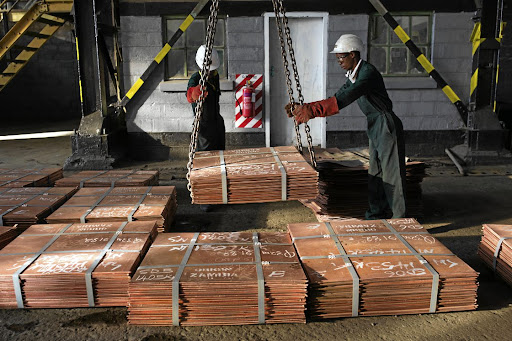 Copper prices slipped from their highest level in more than three weeks on Tuesday, under pressure from a firm dollar and recession worries sparked by interest-rate hikes to fight inflation.

Copper was caught recently caught between bullish and bearish influences.

Prices  advanced earlier on investor hopes that lifting China’s lockdown restrictions will boost demand. Three-month copper on the London Metal Exchange dropped 0.4% to $9,50250 a tonne, after earlier climbing to its highest since May 5 at $9,591.50. US Comex copper gained 0.3% to $4.32/lb.

Shanghai authorities removed lockdown fences on Tuesday, preparing to lift a two-month lockdown at midnight, while China’s cabinet announced a package of 33 stimulus measures to revive its pandemic-ravaged economy.

“The news from China is just enough to create a refocus in the market towards a possibility of a pick up in demand,” said Ole Hansen, head of commodity strategy at Saxo Bank in Copenhagen.

“There’s a slowdown coming, but the question is whether it will be to the extent that it will have a negative impact on global demand,” said Hansen.

A surge in oil prices fanned fear of further acceleration in global inflation that would keep the US Federal Reserve and other central banks raising interest rates.

Copper slid 18% in about two months after touching a record high of $10,845 a tonne in early March on fear of a slowdown in China and inflation disrupting economies elsewhere.

In May, LME copper was on track for its second monthly weakening with a drop of 2.5%.

But weak metals inventory levels are a sign of underlying strength in the market, said Hansen. “It’s quite telling that despite worries about growth and demand, there hasn’t been a pickup of inventory levels at a time of year when you would expect some stock build.”

Markets have shrugged off signs that China’s economic pain may be abating amid easing Covid-19 curbs, and are focused on the inflation outlook
Markets
1 month ago

German inflation is the latest to surprise markets, coming in much higher than expected
Markets
1 month ago
Next Article