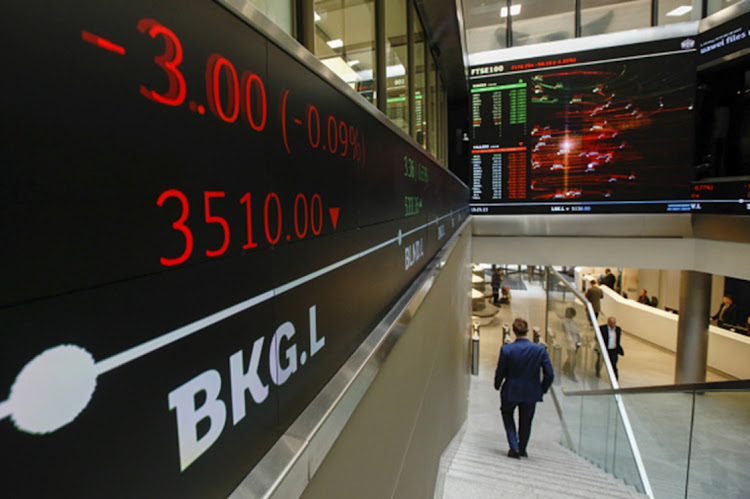 An employee passes share price information displayed on an electronic ticker board inside the London Stock Exchange in London, UK. Picture: BLOOMBERG via GETTY IMAGES/LUKE MACGREGOR

London — European stock indexes opened lower on Monday, after oil prices slid and riskier currencies took a hit during the Asian session as unexpectedly weak economic data from China highlighted fears about a slowdown in growth.

China’s April retail sales plunged 11.1% on the year, almost twice the fall forecast, as full of partial Covid-19 lockdowns were imposed in dozens on cities. Industrial output dropped 2.9% when analysts had looked for a slight increase.

At 9.32am, the MSCI world equity index, which tracks shares in 50 countries, was flat on the day, but still holding above last week's lows.

“This week’s events calendar is relatively quiet, so markets are more than ever at the mercy of headlines related to the global growth outlook,” wrote ING rates strategists in a note to clients.

“Despite gloomy risk sentiment already, we think investors have shown that their focus is increasingly on recession risk.”

European government bond yields were a touch higher, with Germany’s 10-year yield up three basis points at about 0.974% — below the about eight-year high of 1.19% it reached last Monday.

The European Central Bank is likely to decide at its next meeting to end its stimulus programme in July, and raise interest rates “very soon” after that, ECB policymaker Pablo Hernández de Cos said on Saturday.

“It would take a lot of optimism for 10Y treasuries and Bund to test 3% and 1% to the upside in our view,” they said.

The dollar index, which last week surged to a 20-year high of 105.01, was down less than 0.1% on the day at 104.47. Riskier currencies such as the Australian dollar and British pound fell.

The euro was near its lowest since 2017. ECB policymaker Francois Villeroy de Galhau said the euro’s weakness could threaten the central bank's efforts to steer inflation towards its target.

UK labour market data is due on Tuesday and UK inflation data will be out on Wednesday.

Sky-high inflation and rising interest rates drove US consumer confidence to sink to an 11-year low in early May and raised the stakes for April retail sales due on Tuesday.

Oil prices slipped as investors took profit from a recovery in the previous session.

Bitcoin was trading at around $29,532. Last week it plunged to as low as $25,401.05 — its lowest since December, 2020. Already hurt by declining risk appetite, cryptocurrencies sold off last week when a popular stablecoin, TerraUSD, collapsed and lost its dollar peg.

Covid-19-driven lockdowns resulted in Chinese unemployment rising to 6.7% in April
Markets
1 month ago