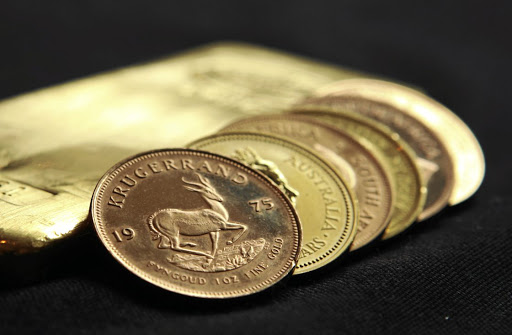 There has been a spike in interest in gold bullion and gold coins like Krugerrands. Picture: BLOOMBERG/CHRIS RATCLIFFE

Bengaluru — Gold prices edged lower on Friday, on track for a third straight weekly loss as the US dollar and Treasury yields rallied on a hawkish US Federal Reserve stance, with investors awaiting US jobs data due later in the day.

The dollar was headed for a fifth winning week versus major peers as benchmark US Treasury yields resumed a climb having hit their highest since November 2018 in the previous session. Investors now eye the US labour department’s non-farm payrolls data for April at 12.30pm GMT to assess its impact on monetary policy.

“I would not be surprised to see another above-consensus wage print, and this may not be good for bullion as the market would read those tea leaves as a sign of improving the odds for a 75 basis point hike at the July Federal Open Market Committee meeting,” said Stephen Innes, managing partner at SPI Asset Management.

The Fed on Wednesday raised its benchmark rate by half a percentage point, the most in 22 years. The Bank of England also raised interest rates on Thursday to their highest since 2009, hiking by quarter of a percentage point to 1%.

Gold, which offers no yield of its own, tends to fall out of favour among investors when interest rates rise.

Among equities, Asian shares tumbled as investors expressed concerns that rising interest rates could hurt global economic growth. With the market back into selling everything mode, it seems like “don’t fight the Fed is back in play,” Innes said.

Gold rises but on track for steep monthly decline

Relief over Emmanuel Macron’s French presidential election win gives way to renewed concerns about the impact of rising interest rates on the global ...
Markets
1 month ago