It’s been a torrid month for riskier assets with world stocks having lost 5.8% so far in April 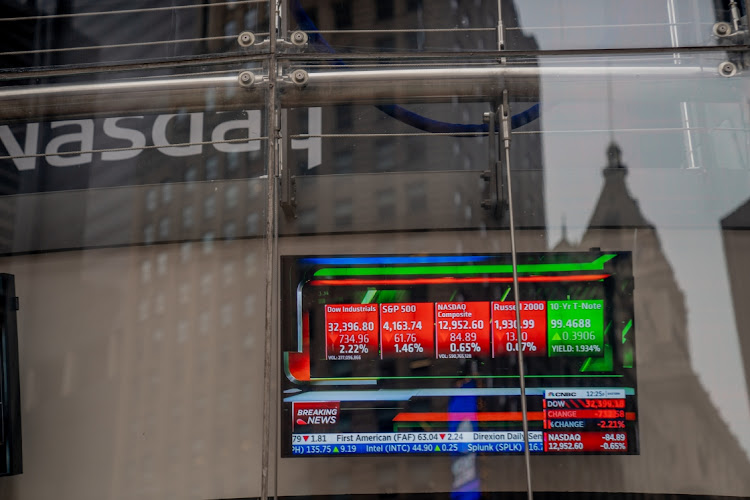 London — World shares rose on Friday, at the end of a month that will be the benchmark’s worst in two years, as a slight pullback in the dollar from 20-year highs offered relief to battered markets.

While the moves gave investors a much-needed respite from worries of a global economic slowdown, inflation and the Ukraine war, it has been a torrid month for riskier assets from equities to emerging markets. World stocks have lost 5.8% so far in April, their worst month since March 2020.

A 5% rise in the dollar’s index, its biggest monthly rise in seven years, has meanwhile pummelled other currencies, with the yen the worst loser, touching two-decade lows.

The dollar eased 0.6% on Friday, however, snapping a four-day streak of gains against a basket of currencies.

“Perhaps the dollar crescendo has peaked,” Colin Asher, senior economist at Mizuho, said, noting that aggressive interest rate hikes from the US Federal Reserve had already been priced in and there was “some two-way risk on whether the Fed actually makes good on what's priced”.

Those bets were not derailed by Thursday data showing the US economy shrank in the first 2022 quarter, though the figures underscored the risks to growth posed by tighter monetary policy.

“If they tighten as much as is priced in, you will get no (US) growth by the end of this year,” Asher added.

Friday’s market recovery was also helped by reports that a resolution was in sight to the dispute over the listing of Chinese companies in the US, said Steven Leung, executive director of institutional sales, at Hong Kong brokerage UOB Kay Hian.

Hong Kong listed tech stocks rose as much as 10%, led by e-commerce players JD.com, Alibaba and Meituan which gained 12%-15%

All three are listed in both the US and Hong Kong bourses and their stock prices had been affected by the dispute.

Also helping were comments from the Politburo, the top decision-making body of China’s Communist Party, saying the government will step up policy support to stabilise the slowing economy, and a strong Wall Street after robust earnings from Facebook parent Meta Platforms had driven the Nasdaq 3% higher overnight.

However, Nasdaq futures were down 0.7%, pressured by disappointing earnings from Amazon after market close. Frankfurt-listed Amazon shares fell 8%.

The earnings season so far has been healthy, with most companies beating estimates, but worries are growing that high input costs and a slowing global economy will crimp the outlook.

“There are four near term catalysts driving the market at the moment: US earnings which we are about half way through, rising US Treasury yields and lots of hawkish speak from the Fed, the war in Ukraine, and China policy,” said Fook-Hien Yap, senior investment strategist at Standard Chartered Wealth Management.

In Europe too, government bond yields slipped despite above-forecast French inflation figures that on the heels of sharply higher German print the day before

China's offshore-traded yuan also firmed but was headed for its biggest monthly drop since 1994, pressured by extended lockdowns in many major cities to curb Covid-19.

“A lot of the dollar pricing has been done and a catch up is due for the laggards,” Mizuho’s Asher said.

He added, however, that worries about China could continue supporting safe-haven dollar flows.

“Chinese lockdowns are looking more prolonged and the authorities are being some tentative in launching counter measures to limit the (economic) slowdown.”

Gold rises but on track for steep monthly decline

JSE could benefit from positive Asian session as Tencent jumps

JSE could benefit from positive Asian session as Tencent jumps