But China’s blue chip index fell another 0.8% after its worst day in two years on Monday 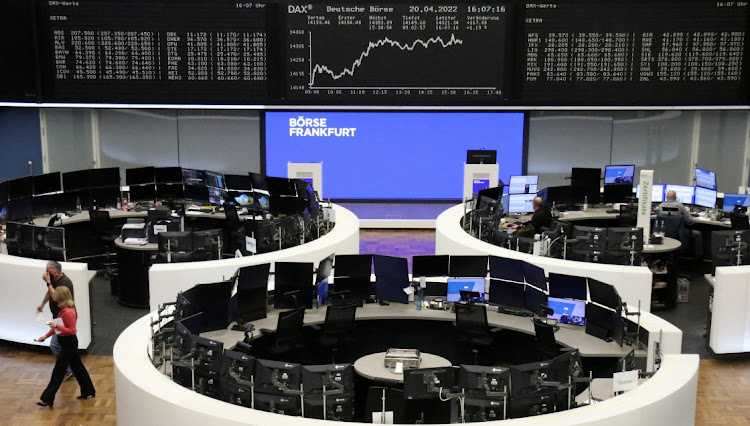 The MSCI world equity index was up 0.2% from six-week lows at 11.17am GMT, helped by a 0.7% gain in Europe's Stoxx 600 index on strong earnings by companies such as bank UBS and shipping group Maersk.

However, China’s blue chip index fell another 0.8% after its worst day in two years on Monday, even as the central bank vowed to step up prudent monetary policy support, particularly for small firms hit by Covid-19.

Three-quarters of Beijing's 22-million people lined up for Covid-19 tests as the Chinese capital raced to stamp out a nascent outbreak and avert the city-wide lockdown that debilitated Shanghai for a month.

News that Elon Musk had clinched a deal to buy Twitter for $44bn in cash buoyed tech stocks. Hong Kong's tech sector rallied 2.9%, boosted by large firms such as Tencent and Alibaba.

The nervousness about China's economic slowdown hit Australian shares, with a drop of 2.1% in the benchmark index , hurt particularly by declines in miners.

US stock futures fell slightly in European trade, pointing to losses of about 0.4% for both the Nasdaq and the S&P 500 following strong tech-led gains on Monday.

"There’s a little bit of a growth scare coming in but in our view there won’t be a immediate slowdown to growth or inflation," said Mike Kelly, head of global multi-asset at PineBridge Investments.

"We saw that European services PMI surprised to the upside and China, despite moving dreadfully slowly on stimulus, is still moving in the direction to try to speed things up," he added.

Markets have also been fretting that an aggressive pace of tightening by the US Fed could derail the global economy, which has only just started to recover from the pandemic.

The Fed is expected to raise rates by a half a percentage point at each of its next two meetings.

"It is unrealistic to think that the U.S. can raise interest rates in this way without looking at the real economy," said Carlo Franchini, head of institutional clients at Banca Ifigest, adding he was also worried about hawkish signals in Europe.

The European Central Bank's Martins Kazaks joined a chorus of policymakers urging a swift exit from stimulus measures, suggesting the bank should raise rates soon, and has room for up to three hikes this year.

"A rate hike right now would be madness ... it would just squeeze demand further, reducing consumption and drive the economy into stagflation, which in my view is a much more likely scenario than you might think," Franchini added.

In currency markets, the dollar was in fine fettle on safe-haven demand. The dollar index against a basket of rivals rose to two-year highs and was last up 0.2% at 101.8.

China’s offshore yuan rose 0.1% to 6.5622 per dollar, staying above Monday's year-low of 6.6090 after the People's Bank of China said it would cut the amount of foreign exchange banks must hold as reserves.

Benchmark US 10-year yields fell 2 basis points to 2.797%, further retreating from hawkish Fed-induced highs hit last week, as the China lockdown and growth fears sent investors to the safety of US bonds.

Germany's 10-year yields, the benchmark of the euro bloc, also fell about 1 basis point to 0.835%, after falling more than 11 basis points the day before.

Oil prices steadied after the previous session’s 4% fall. Worries about China’s fuel demand were soothed by the central bank’s pledge to support an economy hit by Covid-19 curbs.

The all share had fallen more than 3.4% in the previous session
Markets
1 month ago