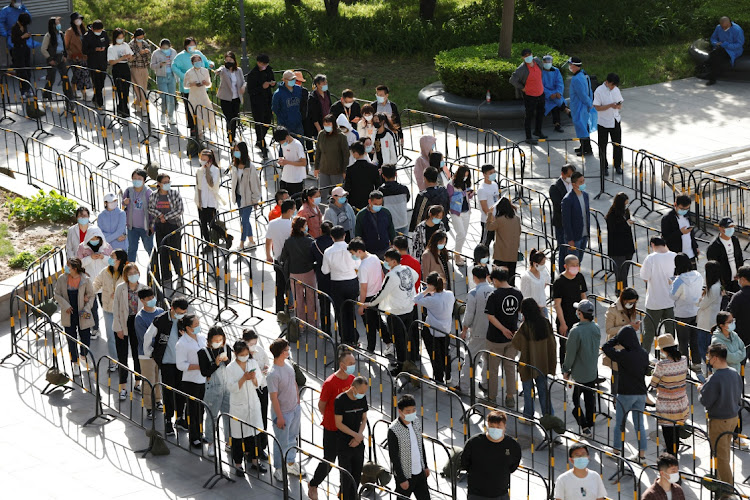 People line up outside a makeshift nucleic acid testing site during a mass testing for the coronavirus disease (COVID-19) in Haidian district of Beijing, China April 26 2022. Picture: REUTERS/CARLOS GARCIA RAWLINS

China’s capital has expanded its Covid-19 mass testing from one district this week to most of the city of nearly 22-million, as the population braced for an imminent lockdown similar to Shanghai’s stringent curbs. China is the world's largest crude oil importer.

Both oil contracts rose more than $1 a barrel earlier in the session following a statement from the People’s Bank of China that it will step up monetary policy support to the real economy.

“I still expect more policy support, but not the flood-like policy deluge the markets have been hoping for, which could leave oil markets adrift over the short term, looking to the US summer driving season and EU sanctions for support,” Stephen Innes of SPI Asset Management said in a note.

The prospect of supply tightness in the physical market related to the phasing out of Russian oil capped the fall in prices.

The parliamentary parties of Germany’s ruling coalition have called on the government to push ahead with a plan to phase out Russian oil and gas imports “as soon as possible”.

But analysts said that the release of oil from emergency reserves has eased concerns of tight supply.

“Focus has shifted towards the demand side of the equation and worries about prolonged supply disruptions have greatly been mitigated by the release of 240-million barrels of SPR oil by IEA members and by the ostensible, albeit somewhat obscured, dealing in Russian oil,” said Tamas Varga of oil broker PVM.

Separately, in a bearish signal for oil markets, five analysts polled by Reuters estimated on average that US crude inventories had increased by 2.2-million barrels in the week to April 22.

The poll was conducted ahead of the release of the inventory report from the American Petroleum Institute at 8.30pm GMT on Tuesday. The official government Energy Information Administration data will be out on Wednesday.