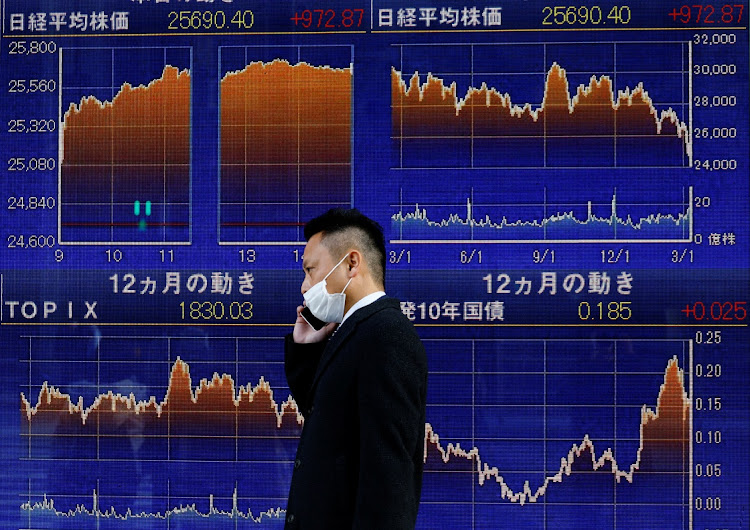 A man wearing a protective mask during the Covid-19 pandemic walks past an electronic board displaying graphs of the Nikkei index outside a brokerage in Tokyo, Japan. Picture: REUTERS/KIM KYUNG-HOON

Sydney — Asian stocks were in the red on Tuesday as surging Covid-19 cases in China hit the confidence of investors who are already worried about the Ukraine war and the first US interest rate rise in three years that could come this week.

MSCI’s broadest index of Asia-Pacific shares outside Japan fell 1.97%, led by pronounced weakness in Chinese stocks. The index is down 8.2% so far this month.

Those losses extended into the Asian session, however, the investor focus had shifted to the demand side, with China’s new wave of Covid-19 infections casting a cloud over the outlook for the world’s second-largest economy.

More broadly, a lack of major progress seen in Ukraine-Russia talks on Monday added to the nervousness in equity markets while concerns are now growing about the potential for new tensions between China and US.

Washington has warned Beijing against providing military or financial help to Moscow after its invasion of Ukraine, as sanctions on Russian political and business leaders mount.

“The question we are asking is whether the markets have reached peak bearishness,” said Jack Siu, Credit Suisse’s chief investment officer for Greater China.

“We know there has been a lot of bad news, there could be worse to come, stock prices have fallen substantially and there is no clarity on any resolutions from US regulators towards Chinese listed stocks there.”

Hong Kong’s Hang Seng index remained mired in negative territory Tuesday, dropping 4% after an almost 5% sell-off a day earlier. Hong Kong’s main board is down 17% so far in March.

The city’s tech index has been hammered, falling nearly 30% so far in March as investors worry about the next regulatory crackdown from US and Chinese authorities on the sector.

Shrugging off the weakness in Asia, however, stock futures for the S&P 500 rose 0.21% while Tokyo’s Nikkei Index reversed its losses and was marginally higher, up 0.22%.

Adding to the overall negative sentiment for markets are rising case numbers of Covid-19 in China, which investors fear will hurt the mainland's economic growth in the first quarter.

“Right now everyone is looking at the Chinese cases and realising that has to have an effect on production,” said BOCOM International head of research Hong Hao.

“China’s growth in the first quarter could be closer to zero than 5.5%. There’s a ripple effect. There’s Ukraine, the risk of US sanctions on China and rising Chinese domestic Covid-19 cases — it does not look good.”

Investor focus is also on the US Federal Reserve, which meets on Wednesday and is expected to hike interest rates for the first time in three years to offset rising inflation.

JSE set for another volatile session as peace talks continue

Markets will be focusing on the continuing conflict in Ukraine and the US Federal Reserve, which is expected to hike interest rates this week
Markets
5 months ago

‘The FOMC will be the economic data highlight of the week, even as the short-term financial markets chase their tails on Ukraine developments’
Markets
5 months ago

Case numbers have more than tripled, while markets are also focused on the potential for peace in Ukraine
Markets
5 months ago
Next Article