The Fed has indicated it is likely to raise US interest rates in March, as has been widely expected 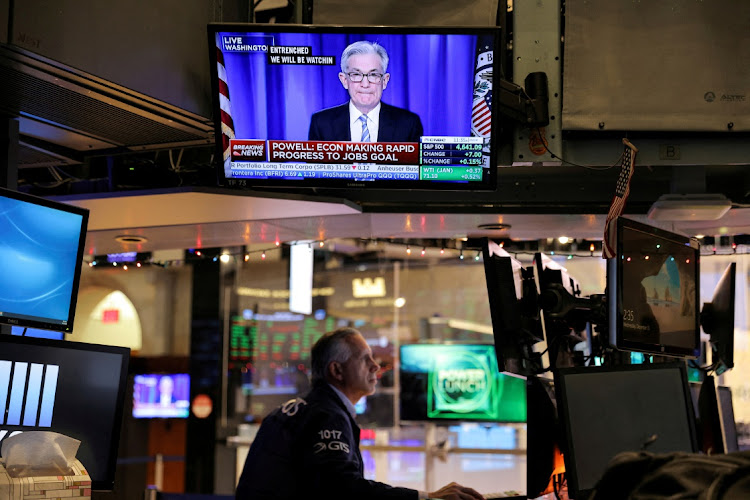 Federal Reserve chair Jerome Powell is seen delivering remarks on a screen as a trader works on the trading floor at the New York Stock Exchange in New York, US, in this December 15 2021 file photo. Picture: REUTERS/ANDREW KELLY

London — Stocks fell on Thursday and US short-term government bond yields rocketed to their highest in 23-months after the US Federal Reserve stuck to plans for an interest-rate increase in March and more policy tightening to curb high inflation.

Wall Street shares plunged on Wednesday and looked set to open lower again on Thursday, although they were off the day’s lows in futures markets by 9.30am GMT.

In Asia, shares slumped to their lowest in nearly 15 months.

In its latest policy update on Wednesday, the Fed indicated it was likely to raise US interest rates in March, as has been widely expected, and reaffirmed plans to end its bond purchases that month before launching a significant reduction in its asset holdings.

But in a follow-up news conference, chair Jerome Powell warned that inflation remained above the Fed’s long-run goal and supply chain issues may be more persistent than previously thought.

“What cheap money has done is provide a safety blanket from bad news,” said Jane Foley, an analyst at Rabobank.

“But as this comfort blanket is pulled away, investors will be more exposed and I suspect this will create a more volatile environment for asset prices.”

Adding to investors’ nervousness are rising concerns over political tension between Russia and Ukraine. That has exacerbated worries over tight energy market supply, keeping oil prices elevated at multiyear highs.

Fed funds futures showed traders pricing in as many as five increases by December, after previously fully pricing for four.

Expectations of Fed tightening sent the policy-sensitive US two-year yield to a top of 1.208%, levels last reached in February 2020. The benchmark 10-year yield was steady at 1.851% having hit a high of 1.88% on Wednesday.

These in turn helped the dollar, lifting the dollar index, which measures the greenback against major peers, 0.4% to 96.823, near five-week highs.

Investors expect the speed at which the Fed tightens policy to be the major determinant of risk sentiment in the coming months, although the Fed has said how quickly it hikes will depend on economic developments and the path for inflation.

“There was a marked shift in terms of a relatively dovish statement and then a relatively hawkish press conference,” said David Chao, global market strategist, Asia Pacific (ex-Japan) at Invesco.

“Powell [is] not committing to the size or the frequency of rate hikes and also the timing of the balance sheet reduction. I think that buys him a bit of wiggle room as to how quickly and with what velocity he wants to normalise monetary policy in the US” said Chao, adding that moves would depend on upcoming economic data.

Oil prices eased but remained elevated near $90 per barrel, a level last seen in October 2014, on the festering tension between Russia and Ukraine.

The US said on Wednesday it had set out a diplomatic path to address sweeping Russian demands in Eastern Europe, as Russia held security talks with Western countries and intensified its military build-up near Ukraine with new drills.

US officials say they are in talks with major energy-producing countries and companies worldwide over a possible diversion of supplies to Europe if Russia invades Ukraine, although the White House said it faces challenges finding alternative sources of energy supplies.

The Fed’s hawkish tone ripped through Asian markets, with a knock-on effect on the JSE
Markets
3 months ago