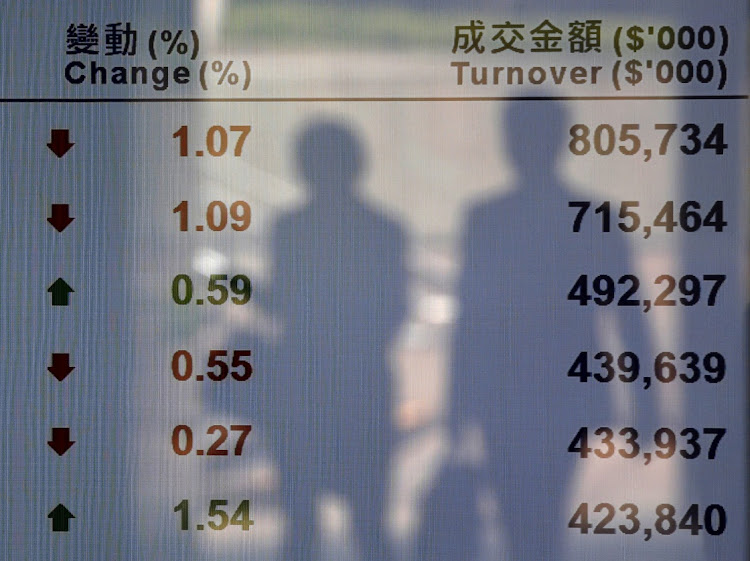 Singapore — Asian share markets and US futures fell on Friday, after US stocks took a knock overnight, hurt by lingering concerns over the Federal Reserve’s tightening and weaker-than-expected economic and earnings data.

MSCI’s broadest index of Asia-Pacific shares outside Japan was down 0.8%, and Japan’s Nikkei slid 1.66%. Oil prices fell sharply and were on track for their first weekly loss this year.

“The sell-off of US stocks yesterday was brutal and will dominate Asia this morning,” said Rob Carnell, chief economist at ING in Singapore.

The Nasdaq dropped late in the US session, to close 1.3% lower, as investors anxiously await the Fed’s policy meeting next week for details on how it intends to tackle inflation.

Nasdaq futures were down 1% in Asian trading, hurt by Netflix  forecasting weak first-quarter subscriber growth after the close.

The moves extended to Chinese shares with the Hong Kong benchmark losing 0.24% after posting its best day in six months the day before and Chinese blue chips losing 0.5% also after gains the day before.

China cut its benchmark mortgage rates on Thursday, the latest move in a round of monetary easing aimed at propping up an economy soured by the country’s troubled property sector and worries over the Omicron variant of coronavirus.

“The main divergence in equity market performance between the US and Greater China can be attributed to a bifurcation in monetary policies,” said David Chao, global market strategist for Asia Pacific at Invesco.

China’s moves were “a very encouraging sign” but the Fed’s actions could add near-term market volatility, he said.

Oil dropped as Opec+ struggled to meet its scheduled increases in production targets and the spectre of Russia invading Ukraine sent jitters through global markets.

“Getting product out to market is a major factor weighing right now, because demand remains firm as the world slowly reopens,” Carnell, said.

US Treasury yields were slightly lower along the curve on Friday, having risen sharply earlier in the week as investors positioned themselves for the likelihood that the Federal Reserve will tighten monetary policy more aggressively to stave off inflation.

Rising yields had helped the dollar to gain earlier in the week, though on Friday the dollar index remained largely flat against a basket of six major currencies.

The greenback did, however, lose ground on the safe haven yen, falling to a one-week low of 113.8/$, while the risk friendly Australian dollar shed 0.39%.