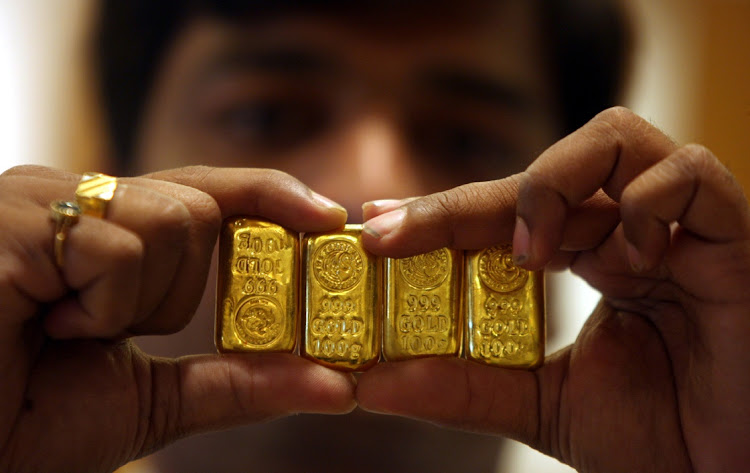 Bengaluru — Gold prices fell on Wednesday towards previous session’s one-week low as the prospect of aggressive rate hikes by the US Federal Reserve sent benchmark treasury yields to two-year highs, reducing the appeal of non-yielding bullion.

“We seem to be coiling up for some kind of breakout, likely on the downside, as the handoff occurs where inflation expectations start to slow down while nominal rates shift up around expectations for central bank action and that starts to really bid up real yields,” said DailyFX currency strategist Ilya Spivak.

Gold is considered an inflationary hedge, but higher interest rates tend to weigh on the precious metal.

Benchmark US treasury yields jumped to two-year highs, while the dollar index posted its best daily gain in four weeks on Tuesday, making gold expensive for holders of other currencies.

Traders await the Fed meeting on January 25-26, expecting a more aggressive tone in tackling unabated inflation, which is the highest in nearly 40 years at 7%.

Adding to inflationary pressures, oil prices rose to a seven-year high as an outage on a pipeline from Iraq to Turkey increased supply concerns amid worrisome geopolitical troubles in Russia and the United Arab Emirates (UAE).

“It’s very tempting to look at the geopolitical backdrop as something that people think about when they consider gold ... [though] gold doesn’t seem to be behaving that way at the moment. It seems sort of firmly anchored to this Fed narrative,” Spivak said.

JSE slips as corporate earnings in US take centre stage