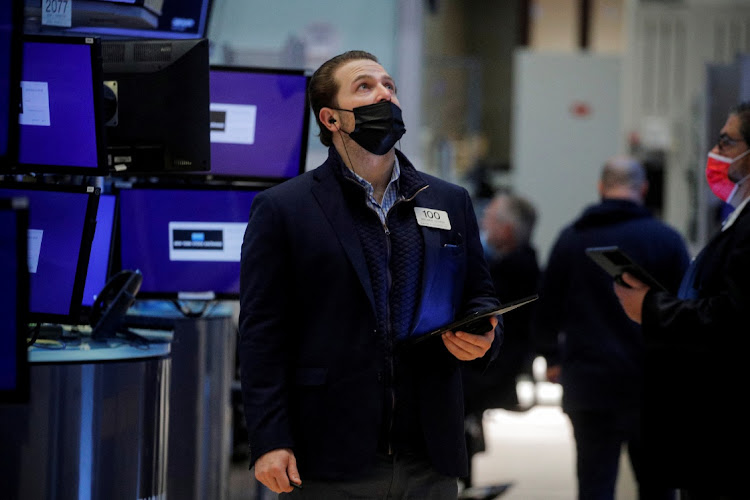 Traders work on the floor of the New York Stock Exchange (NYSE) in New York City, US on January 10 2022. Picture: REUTERS/BRENDAN MCDERMID

London — Global stocks edged up and bond yields clung to recent highs on Tuesday as investors awaited US Federal Reserve chair Jerome Powell’s appearance before the Senate banking committee, hoping for clues to the timing of expected policy tightening.

Powell, who is seeking a second four-year term as head of the Fed, appears before the committee on Tuesday followed by a hearing with vice-chair nominee Lael Brainard on Thursday.

Equity markets had a bruising start to the year as bets that the Fed could raise interest rates as soon as March spurred investors to pare risky assets and lifted the 10-year treasury yield to a two-year high.

The MSCI All Country stock index nudged 0.2% up to 742.93 points on Tuesday. In Europe, the Stoxx index jumped 1%, snapping a three-day losing streak to enjoy its best day in nearly three weeks.

"The flight path is still for growth to remain above trend, with healthy businesses and households and capex policies," said Grace Peters, head of investment strategy for Europe, Middle East and Africa at JPMorgan Private Bank.

"A lot of this money is just starting to come into the system now so we don't think the hawkish mood at central banks and the move up in bond yields derails the economic expansion or leads to any prolonged downturn in equities," she added.

However, S&P 500 and Nasdaq futures pointed to a flat start for US stocks.

US December consumer inflation data will be released on Wednesday, with the headline CPI seen coming in at a red-hot 7% on a year-on-year basis, boosting the case for rates to rise sooner rather than later.

Inflation pressures prompted the Fed in December to flag plans to tighten policy faster than expected, possibly even hiking rates in March, though that was before it became clear just how fast the Omicron variant would spread.

He did not mention the central bank’s plans to hike rates explicitly and this week's hearings are the first opportunity for Powell and Brainard to shed more light on their views.

"We continue to believe liftoff in March is increasingly likely. How these debates are settled will likely have implications for post-liftoff rate hikes," Nomura's economists said in a report, referring to US monetary policy.

"In particular, we believe comments regarding earlier runoff and less aggressive rate hikes support our view that the Fed will slow the pace of rate hikes to two per year in 2023."

Eurozone government bond yields hovered near recent peaks while 10-year US treasury yields rose to an almost two-year high above 1.8% overnight, before retreating to 1.74%, providing only muted support for the greenback.

The dollar index, which measures the currency against six counterparts, hovered around 95.86.

The euro hit a seven-week high versus the Swiss franc, following a rise in Swiss National Bank sight deposits last week — a possible sign that the central bank is intervening to limit the franc's strength.

Bitcoin was back up at about $42,200 after having dropped below $40,000 on Monday for the first time since September.

Oil prices gained after two days of losses with Brent crude futures up 0.8% at $81.66 a barrel following a 1% drop in the previous session.

Analysts fear the consumer price report will show core figure climbing to its highest in decades, with a rate rise in March
Markets
1 week ago