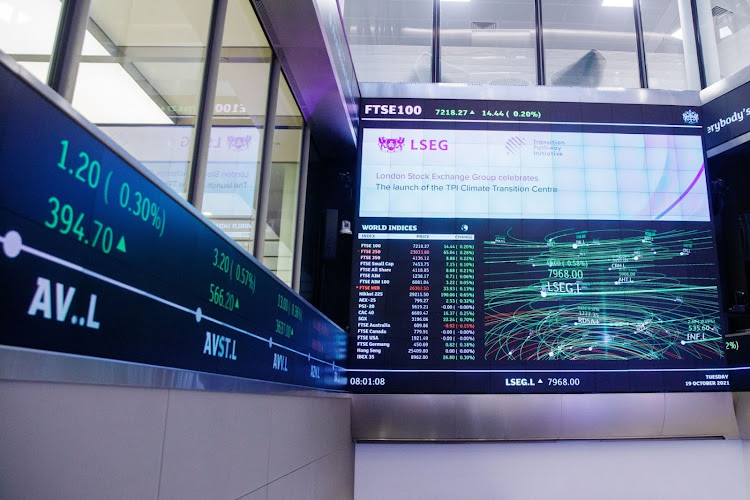 London — World stocks stalled at two-week highs on Thursday as increased restrictions in parts of the world to contain the Omicron coronavirus variant tempered optimism after encouraging news on the vaccine front.

That left MSCI’s world stock index hovering near two-week highs but struggling to make much headway after three days of straight gains.

News on Wednesday from drugmakers Pfizer and BioNTech that a three-shot course of their Covid-19 vaccine was shown to generate a neutralising effect against the Omicron variant in a laboratory test has cheered investors and lifted the S&P 500 within 1% of a new record high.

But a note of caution also set in across world markets as governments took fresh steps to contain the spread of the new variant.

“With Omicron, we still don’t know the efficacy of vaccines and spread and nature of this variant,” said Guy Miller, chief market strategist at Zurich Insurance Group. “In the near-term, calling where markets go is challenging. Longer-term, we still have many drivers that favour equities.”

A strong macro-economic environment next year that should support company earnings, Miller added.

As risk appetite faltered, risk-sensitive currencies and oil prices also lost steam. After strengthening 2.6% in three days, the growth-sensitive Australian dollar was flat at $0.7165, while oil prices dipped as European trade got under way. Brent crude futures fell 0.25% to $75.64 a barrel and US crude dipped 0.11% to $72.29.

Hopes for monetary easing after a cut to banks’ reserves ratio this week and fairly benign inflation figures on Thursday lifted Chinese shares and Asian shares outside Japan, which rose 0.6% to a two-week peak.

The blue-chip CSI300 index was last up nearly 2% and has gained almost 4% for the week so far. If sustained, that would mark the largest weekly leap since February.

Bonds were nursing losses as hope on the virus outlook left a clearer path to higher rates. Traders’ focus turned to the release of US inflation data on Friday and a Federal Reserve meeting next week for indications on the timing of rate increases.

Fed funds futures are priced for rates to lift off next May, and on Wednesday two-year Treasury yields touched their highest since March 2020 at 0.7140%.

“An acceleration in the pace of tapering by the Fed is almost being treated as a foregone conclusion,” said analysts at ANZ Bank, and beyond it looms an expectation of higher US interest rates in 2022. “But a strong number could ramp up expectations of a hike in Q2 next year.”

European Central Bank policymakers are homing in on a temporary increase in their regular bond-buying programme that would still significantly reduce overall debt purchases once its pandemic-fighting plan ends in March, sources said.

The greenback was 0.2% softer at 113.46 yen, while sterling edged above Wednesday’s one-year low of $1.31615 overnight after the announcement of the tighter Covid rules.

Softer dollar gives gold a shine ahead of US inflation meeting

Softer dollar gives gold a shine ahead of US inflation meeting