Global markets at record as investors brace for tapering 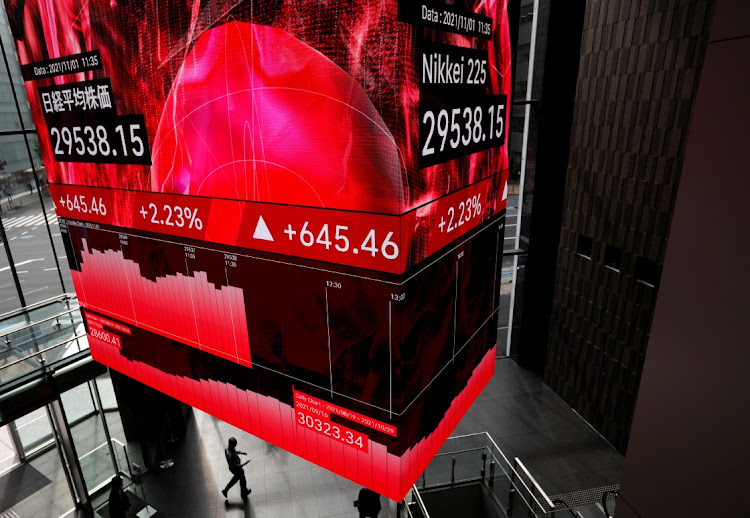 An electronic board showing Japan’s Nikkei share average is seen inside a conference hall in Tokyo, Japan on November 1 2021. REUTERS/ISSEI KATO

London — Global stock markets traded at fresh record-highs on Wednesday while the dollar and US Treasury yields ticked down as investors braced for the world’s largest economy to start cutting pandemic-era monetary stimulus.

The US Federal Reserve is expected to announce the tapering of its monthly $120bn asset-purchase programme in its policy statement at 6pm GMT, a move widely seen as marking a new chapter in the world’s policy response to Covid-19.

European stock markets rose to an all-time high at the open after Wall Street’s main indices also scored new records on Tuesday. US futures were pointing to a flat open for the next session on Wall Street while MSCI’s all-country world index, which tracks equity performance in 50 nations, was up 0.02%, just a whisker from a new milestone.

The Tokyo bourse was closed for a public holiday while MSCI’s broadest index of Asia-Pacific shares outside Japan lost 0.04%.

Boosted by fiscal and monetary stimulus, global stocks have thrived during the global economic rebound, which has followed the recession triggered by the first wave of Covid-19 infections in 2020.

“From a pure macro perspective, negative real rates mean there is no alternative to stocks, while at same time the earnings cycle is very strong,” said Salman Ahmed global head of macro-economics at Fidelity International.

“Negative real rates is a very powerful force,” he added, as investors wonder whether equities are at risk of losing their edge against other asset classes with the direction of travel for interest rates firmly on the rise.

Markets are almost certain the Fed will taper, but are looking to see if policymakers will give hints about the possibility of interest rate hikes next year.

Fed officials are trying to maintain a balance between raising rates to ensure inflation remains contained and giving the economy as much time as possible to restore the jobs lost since the pandemic.

The Bank of England could meanwhile become the first major central bank to raise borrowing costs after the coronavirus crisis when its policymakers meet on Thursday.

Moves in currency markets were limited on Wednesday with the US dollar index losing 0.07% at 94.036 against a basket of major peers.

The Australian dollar picked up 0.24% after dropping 1.2% against the dollar a day earlier after more dovish remarks from the Reserve Bank of Australia, even as it abandoned its short-term yield target.

Oil prices fell as industry data pointed to a big build in oil stocks in the US, the world’s largest oil consumer, and as pressure mounted on Opec to increase supply.

JSE firmer ahead of Fed decision