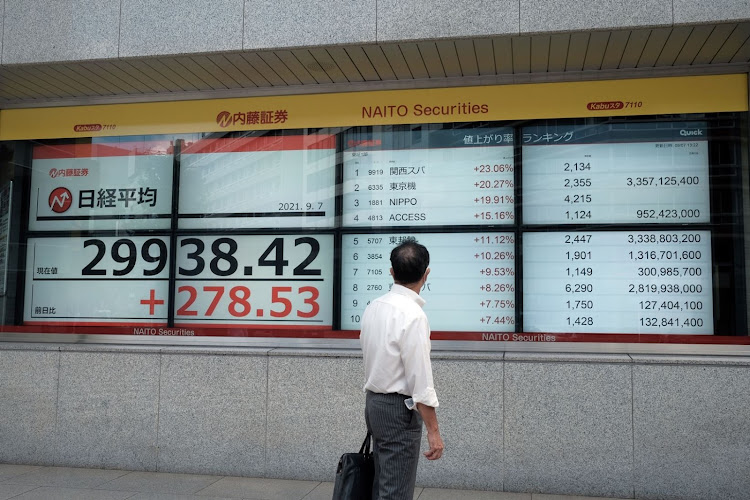 Singapore — Asian stocks eked small gains on Thursday but the upbeat mood that lifted the Dow Jones and bitcoin to records ebbed on fresh worries about China’s property sector after an asset sale at embattled developer Evergrande collapsed.

Currencies and commodities were broadly steady, leaving risk-sensitive units like the Australian dollar at multi-month highs, while Brent crude futures inched up to a new three-year peak of $86.10 a barrel.

Late on Wednesday, China Evergrande, the heavily indebted developer at the centre of a credit crunch in China’s real estate sector, said it abandoned a $2.6bn sale of a stake in a subsidiary and that it had made no progress on other sales.

Its shares dropped 10% at the open in Hong Kong and the company will be in default if a 30-day grace period due to expire over the weekend passes without the payment of a dollar bond coupon.

Shares in rival developers drew support on Thursday thanks to reassurance from a number of top Chinese officials that the trouble in the sector would not be allowed to escalate into a full-blown crisis, but global investors remain nervous.

“If you looked at your screens you would think that the world is a pretty happy place,” said Andrew Ticehurst, a rates strategist at Nomura in Sydney.

“The US stock market has gone up for six days in a row, bitcoin’s made a record and the US bond market is calm. On the surface it looks benign,” he said.

“But below the surface we are uncomfortable about a number of things,” he added, chiefly the slowdown in China’s economy seen in data earlier this week, and concerns about potential fallout from Evergrande’s troubles.

Overnight on Wall Street, strong earnings helped the Dow Jones touch a record peak during trade and the S&P 500 rose 0.4% to finish within a whisker of its record closing high. The Nasdaq eased slightly.

Longer-dated treasury yields rose on expectations of growth and inflation and the benchmark 10-year treasury yield made a five-month high of 1.673% on Wednesday. It last sat just below that level at 1.6656% in the Tokyo session.

Investors have figured that surging energy prices and tightening job markets will pressure policymakers in the US and elsewhere to raise interest rates before long.

Fed funds futures have priced a 25-basis-point US rate hike in the third quarter of 2022, while eurodollar markets expect higher rates as soon as the second quarter.

Even more aggressive moves in Antipodean rates markets — along with strong commodity prices — have helped the Australian and New Zealand dollars to sharp gains in recent sessions.

“All is seemingly well, the shindig is on and thus no-one wants the big dollar,” said Rodrigo Catril, senior currency strategist at National Australia Bank, in a note to clients.

Bitcoin, which hit a record on Wednesday in the wake of the US listing of a futures-based exchange-traded fund, eased from its peak to $64,651 while fellow cryptocurrency ether hit a five-month top of $4,243.

Positive corporate earnings lifted US markets overnight, but there are also concerns property giant Evergrande is headed for default
Markets
1 month ago