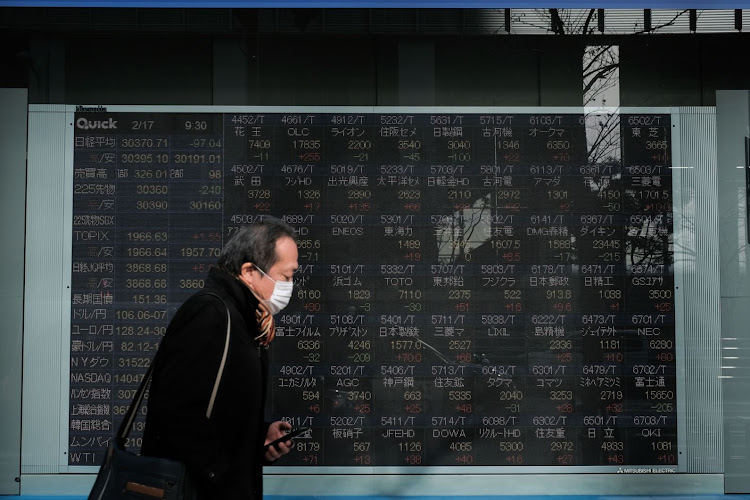 A pedestrian wearing a protective mask walks past an electronic stock board outside a securities firm in Tokyo, Japan. Picture: BLOOMBERG/SOICHIRO KORIYAMA

Tokyo — Global stocks inched higher on Tuesday to a record high for the eighth straight session as investors wagered the US Federal Reserve is likely to delay the start of tapering its asset purchases after the soft US jobs data.

Tokyo’s Nikkei rallied as much as 1.3%, moving past the psychological barrier of 30,000 for the first time since April, also helped by a reshuffle in the Nikkei.

Mainland Chinese shares were little changed in early trade while MSCI’s ex-Japan Asian-Pacific index was down 0.1%

The world’s shares, measured by MSCI’s gauge of 50 markets, tacked on 0.1% to log its eighth consecutive day of gains to record highs. The latest rally, which started after Federal Reserve chair Jerome Powell’s dovish speech at Jackson Hole Symposium late last month, received a further boost from a surprisingly soft US payrolls report on Friday.

The US economy created 235,000 jobs in August, the fewest in seven months as hiring in the leisure and hospitality sector stalled, reducing expectations of an early tapering by the Fed. That was way below economists’ forecast of 728,000.

“It’s the service sector that is losing steam and that shows the impact of the Delta variant. And the Fed has no reason to insist on tapering this year if the Delta variant is having an impact. After all its policy moves are contingent on job recovery,” said Norihiro Fujito, chief investment strategist at Mitsubishi UFJ Morgan Stanley Securities.

US S&P 500 futures were 0.1% higher from Friday’s close after the US holiday on Monday. Bond prices eased slightly, pushing up their yields, with the 10-year US Treasuries yielding 1.339%, up 1.3 basis points.

The Australian dollar fetched $0.7455, not far from its one and a half-month high of $0.74775 set on Friday. The immediate focus is on the Reserve Bank of Australia’s policy meeting later in the day and on whether it will stick to its plan to start tapering its bond purchase this month.