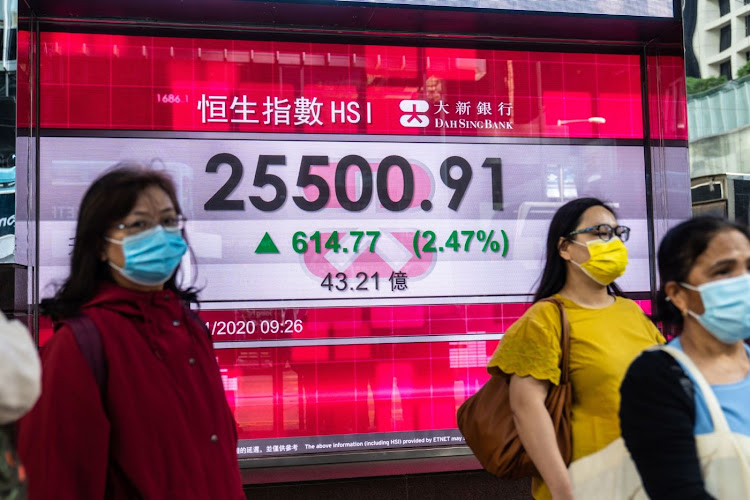 Hong Kong  — Asian shares held onto their recent gains on Wednesday after last week’s pummelling, as global equities rebounded thanks to a combination of positive Covid-19 vaccine news and easing worry over tapering of Federal Reserve stimulus.

MSCI’s broadest index of Asia-Pacific shares outside Japan was last off slightly, but still up 3.7% so far this week. The index fell to its lowest in 2021 at the end of the previous week.

Japan’s Nikkei was flat. A Reuters poll of analysts and fund managers showed Japanese shares are expected to recover from their eight-month low marked on Friday to near a 30-year high by the end of this year.

Asia was anchored by overnight gains in all three major US stock indices, with the Nasdaq and S&P 500 closing at record closing highs, the S&P 500's 50th record high close this year.

Investors continue to fret over spiking Covid-19 infections caused by the highly contagious Delta variant, but the US Food and Drug Administration granted full approval on Monday to the Covid-19 vaccine developed by Pfizer, raising the hope inoculations could accelerate.

The Hong Kong benchmark jumped nearly 1% on opening but was last down 0.5%, after posting its best day in a month the day before as the market pulled further away from last week’s finish of its lowest close for this year.

The Hang Seng Tech index rose soon after the bell gaining over 3%, building on this week’s strong gains as investors piled into oversold stocks, but later gave up those gains to trade flat.

“It’s been a fairly obvious trade to go back to neutral particularly on stocks that have been oversold,” said Rob Munford, a Hong Kong based investment manager at GAM Investments.

“How it progresses from here, I don’t think is as much about China and Asia but what the US does. If it’s a benign scenario out of Jackson Hole I think you’ll definitely see China mean revert,” he said.

On Friday, the Federal Reserve will have its annual economic symposium, traditionally held at Jackson Hole, though this year it will take place virtually due to the spread of Covid-19 in the county.

The focus remains squarely on Fed chair Jerome Powell’s remarks at the event for any clues regarding the timeline for Fed’s tapering of asset purchases, an issue that has buffeted financial markets in recent months.

The yield on the benchmark 10-year treasury notes rose to 1.3019%, their highest since August 13.

The improved risk sentiment kept the dollar under pressure, leaving it hobbled near a one-week low vs major peers on Wednesday. Commodity currencies like the Australian and New Zealand dollars have made solid headway this week.

“If Powell speaks about the policy outlook and more specifically, hints at the time and/or pace of tapering, the dollar could get a boost in our view,” wrote analysts at CBA in a note.

“In the meantime, the dollar will remain guided by broader market mood.”

Safe-haven gold fell in tandem with the broad increase in risk appetite, with the spot price dropping 0.4% to $1,796.03/oz.

All eyes are on the Jackson Hole symposium later this week, which may contain further details on paring back monetary policy stimulus
Markets
8 months ago

MARKET WRAP: JSE shines on US approval of Pfizer vaccine