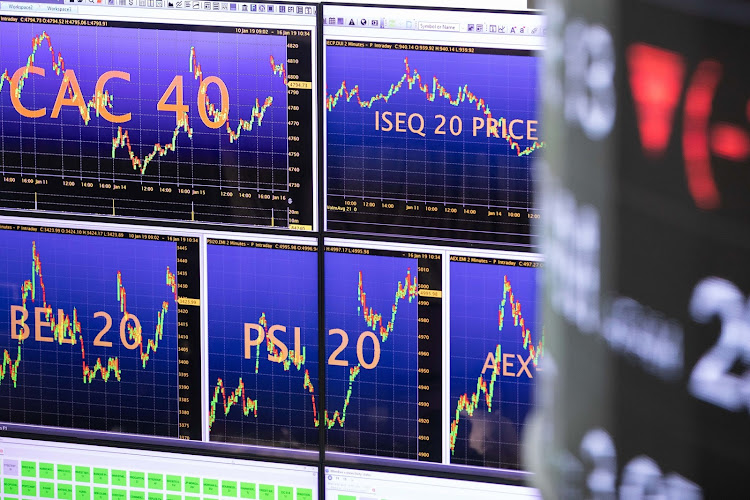 London/Hong Kong — World stocks hit yet another record high on Tuesday, with European shares poised for their longest winning streak since 2019 as investors bet that “transitory” inflation pressures are likely to keep the US Federal Reserve from signalling a shift in policy settings at its meeting later in the day.

The majority of investors surveyed by Bank of America said inflation was transitory, a marked change from March, when worries about more sustained price rises had sent US 10-year Treasury yields surging to nearly 1.8%. With the yield now pinned below 1.5%, BofA expects the Fed to signal a reduction in stimulus by September.

Abating worries about inflation helped US and European shares scale new highs, with the pan-regional Stoxx 600 rising 0.4%, its eighth straight day of gains. US stock futures were up 0.1%.

“Several factors that have pushed up inflation are likely to fade in the coming months,” said Mark Haefele, chief investment officer at UBS Global Wealth. “We don’t expect inflation to prompt a premature tightening of monetary policy or to derail the equity rally.”

The two-day Fed meeting starts on Tuesday, with a final statement published after the meeting closes on Wednesday.

Traders around the world are looking for any hints whether and when the Fed plans to taper its bond buying programme as the US economy bounces back from the pandemic fallout.

Nearly 60% of economists in a Reuters poll expect a taper announcement will come in the next quarter, despite a patchy recovery in the job market.

“While no immediate changes in monetary policy are anticipated, an increase in the share of FOMC members who think rates will need to increase in 2023 is expected,” analysts at ANZ wrote in a note to clients. “Should three more members pencil in rate rises for 2023, that would tip the majority in favour of moving rates relatively soon.”

In Asia, the MSCI’s broadest index of Asia-Pacific shares outside Japan was little changed. Japan’s Nikkei rose 1% and the Australian benchmark traded up 0.93%, but Chinese blue chips fell 1.1%.

China’s markets were closed on Monday for a holiday, meaning this was their first response to a joint statement by the G7 that had scolded Beijing over a range of issues, which China called a gross interference in the country’s internal affairs.

In the currency markets, the dollar held on to its gains against its main counterparts. The dollar index was at 90.414, not far from the top of its recent range.

Retail sales and industrial production data due later on Tuesday could spark some modest dollar volatility, analysts at CBA wrote in a research note.

Benchmark 10-year yields were at 1.4838%, little changed from Monday, when they rebounded from Friday’s three-month low.

As for commodities, US crude ticked up 0.38% to $71.15/bbl. Brent rose to $73.1/bbl as talks dragged on over the US rejoining a nuclear agreement with Iran, suggesting any increase in supply from Tehran is some time away.

Even bitcoin was quiet, fluctuating a little above $40,000. It rose on Sunday and Monday after Elon Musk said Tesla could resume accepting payment in the world’s largest cryptocurrency.

JSE muted ahead of US Fed’s meeting outcome