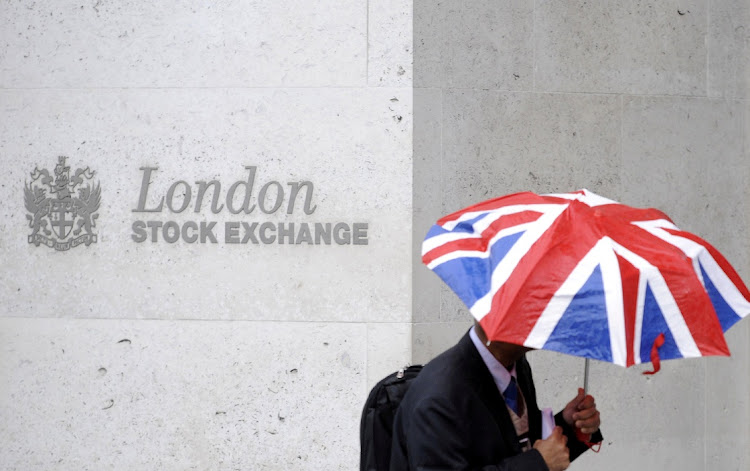 A worker shelters from the rain under a Union Flag umbrella as he passes the London Stock Exchange in London. File photo: REUTERS/TOBY MELVILLE

London/Shanghai — Shares gained on Friday and bond yields fell from the US to Europe as investors shrugged off rising US consumer prices, even as fears of longer-term inflation lingered.

The Euro Stoxx 600 added 0.3% to hit a record high and was on course for a sixth straight day of gains. London shares gained 0.6%, helped by a 1% gain for the mining sector, while Paris climbed 0.4%.

Also boosting sentiment in Europe was the European Central Bank (ECB) on Thursday raising its growth and inflation projections, while pledging a steady flow of stimulus for now.

The US consumer price index posted on Thursday its biggest year-on-year gain since August 2008 of 5%, after a 4.2% rise in April. Hefty contributions from short-term rises in airline ticket prices and used cars, raised doubts about underlying inflationary pressures.

The rise in the US consumer price index reflected short-term adjustments related to the reopening of the economy, some economists say. As such, many investors are confident the Federal Reserve is deftly handling a rebound in economic growth, though its definition of “transitory” remains unclear.

At the same time, US labor department data showed the lowest level of new claims for unemployment benefits in nearly 15 months last week.

US stocks rallied to record highs on the data, with 10-year US Treasury yields also dipping to a three-month low.

Market players said inflation worries have faded in the last month, even if the spectre of great pressure over the long run remains.

“Peak inflation concern was almost a month ago before the higher prints came in,” said Kiran Ganesh, head of multi asset at UBS Global Wealth Management in London. “Markets seem to be taking the Fed at its word but when we talk to clients there is concern about long-term inflation.”

MSCI’s broadest index of Asia-Pacific shares outside Japan was last up 0.4%.

Falling expectations that higher inflation could lead to early Fed tightening prompted a flattening of the US yield curve, with the spread between the 10-year and two-year yield at its narrowest since late February on Friday.

“We are going to get a further boost from the consumption side, and we therefore expect bond yields moving higher.”

The US dollar fell as yields dipped. Against a basket of currencies it fell slightly to 90.045, hemmed into the relatively tight trading range of this week and down very slightly for the week.

The ECB’s dovish commitment to stick with its elevated tempo of bond buying held the euro in check at $1.2185.