Tesla owner seemed to agree with a post that reads it should divest what at one point was a $1.5bn stake 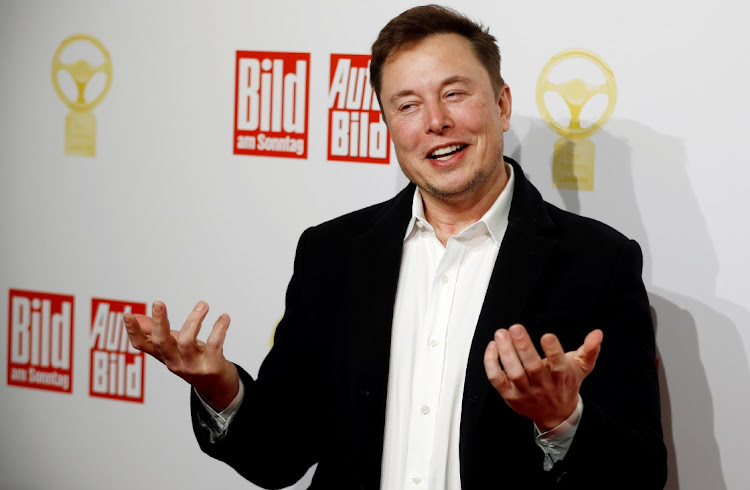 Tesla CEO Elon Musk has done an about-turn on the use of bitcoin. Picture: REUTERS/HANNIBAL HANSCHKE

Elon Musk continued to whipsaw the price of bitcoin, sending it to the lowest since February after implying in a Twitter exchange on Sunday that Tesla may sell or has sold its cryptocurrency holdings.

Bitcoin slid below $45,000 for the first time in almost three months after the billionaire owner of the electric-car maker seemed to agree with a Twitter post that reads Tesla should divest what at one point was a $1.5bn stake in the largest cryptocurrency. It traded at $45,270 as of 5.51pm in New York, down about $4,000 from where it ended on Friday.

The online commentary was the latest from the mercurial billionaire in a week of public statements that have roiled digital tokens. He lopped nearly $10,000 off the price of bitcoin in hours after saying Tesla wouldn’t take it for cars. A few days earlier, he hosted Saturday Night Live and joked that Dogecoin, a token he had previously promoted, was a “hustle,” denting its price. A few days later he tweeted he was working with Doge developers to improve its transaction efficiency.

Musk’s disclosure in early February that Tesla used $1.5bn of its nearly $20bn in corporate cash to buy bitcoin sent the token’s price to record and lent legitimacy to electronic currencies, which have become more of a mainstream asset in recent years despite some scepticism.

His latest dust-up with bitcoin started with a tweet from a person using the handle @CryptoWhale, which reads, “Bitcoiners are going to slap themselves next quarter when they find out Tesla dumped the rest of their #bitcoin holdings. With the amount of hate @elonmusk is getting, I wouldn’t blame him…”

The Twitter account @CryptoWhale, which calls itself a “crypto analyst” in its bio, also publishes a Medium blog on market and crypto trends.

Musk has spent hours on Sunday hitting back at several different users on Twitter who criticised his change of stance on bitcoin last week, a move he said was sparked by environmental concerns over the power demands to process bitcoin transactions. He said at the time that the company wouldn’t be selling any bitcoin it holds.

An outspoken supporter of cryptocurrencies with a cult-like following on social media, Musk holds immense sway with his market-moving tweets. He has been touting Dogecoin and significantly elevated the profile of the coin, which started as a joke and now ranks the fifth largest by market value.

Dogecoin is down 9.6% in the last 24 hours, trading at 47c late on Sunday afternoon, according to data from CoinMarketCap.com.

Musk’s Sunday social-media escapades were the latest chapter in one of the zaniest weeks in a crypto world famous for its wildness. For die-hards, the renewed slumps in bitcoin and other tokens have done nothing to deter crypto enthusiasts who say digital coins could reach many times their current value if they transform the financial system.

“We’re looking at the long term and so these blips, they don’t faze us,” Emilie Choi, president and COO of crypto exchange Coinbase Global, said last week on Bloomberg TV about the wild swings prevalent in the market. “You’re looking for the long-term opportunity and you kind of buckle up and go for it.”

Seat belts were needed by anyone watching the crypto world in the past eight days. Aside from Musk’s antics that sent Doge and bitcoin on wild rides, many other developments pushed around prices.

Tether, the world’s largest stablecoin, disclosed a reserves breakdown that showed a large portion in unspecified commercial paper. Steve Cohen’s Point72 Asset Management announced that it would begin trading cryptocurrencies. And a long-standing critique of the space reared its head again: illicit usage.

It was reported that the owners of the Colonial Pipeline paid a $5m ransom in untraceable digital currencies to hackers that attacked its infrastructure, while Bloomberg also reported that Binance Holdings, the world’s biggest cryptocurrency exchange, was under investigation by the justice department and Internal Revenue Service regarding possible money-laundering and tax offences.

But, “for many crypto assets such as bitcoin and ethereum, the long-term story has not changed”, said Simon Peters, an analyst at multiasset investment platform eToro. “This emerging asset class continues to revolutionise many aspects of financial services, and while nothing goes up in a straight line, the long-term fundamentals for crypto assets remain as solid as ever.”

Bitcoin was already swinging wildly on the weekend before Musk tweeted. The two days tend to be particularly volatile for cryptocurrencies, which — unlike most traditional assets — trade around the clock every day of the week. Bitcoin’s average swing on Saturdays and Sundays so far this year comes in at 4.95%.

That type of volatility is due to a few factors: Bitcoin is held by relatively few people, meaning that price swings can be magnified during low-volume periods. And the market remains hugely fragmented with dozens of platforms operating under different standards. That means cryptocurrencies lack a centralised market structure akin to that of traditional assets.