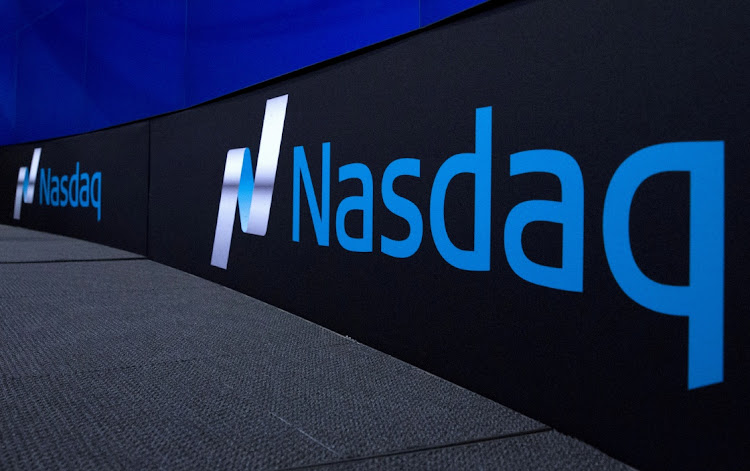 The Nasdaq logo is displayed at the Nasdaq Market site in New York, the US. Picture: BRENDAN McDERMID/REUTERS

New York  —  US stocks closed lower on Tuesday as rising commodity prices and labour shortages fed fears that despite reassurances from the US Federal Reserve, near-term price spikes could translate into longer-term inflation.

Technology stocks were among the biggest losers, mirroring a sell-off in China, where talk of tighter regulation sent technology shares skidding. But US shares clawed back some of their losses over the course of the day.

“Today feels like a catch-up in that tech has been weak so far this month and it’s finally spilt over into other areas of the market and we’re seeing broader weakness,” said Ryan Detrick, senior market strategist at LPL Financial.

Bets that inflation could accelerate in the coming months burst to the fore on Monday when the break-even rate on five-year US treasury inflation-protected securities —  a measure of inflation expectations — jumped to a decade high at 2.717%. It traded at 2.695% by late Tuesday. The 10-year securities break-even rate stood at 2.539%, indicating that the market sees inflation averaging 2.5% a year for the next decade, reports said.

Economic data released on Tuesday from the labour department showed job openings at US companies jumped to a record high in March, further evidence of the labour shortage hinted by Friday's disappointing employment report.

The report suggests labour supply is not keeping up with surging demand as employers scramble to find qualified workers.

Burrito chain Chipotle Mexican Grill announced it would hike the average hourly wage of its workers to $15, a further sign that the worker shortage in the face of a demand revival could add fuel to the inflation surge.

That worker shortage, along with a supply drought in the face of booming demand could contribute to what is seen as inevitable prices spikes, which the Fed has repeatedly said are unlikely to translate into long-term inflation.

“The inflation concerns continue,” Detrick said. “The supply chain issues coupled with record stimulus coupled with apparently a tighter labour market have all contributed to fears that inflation could trend higher over the summer months.

“I don’t think (the market) believes the Fed when it says they won’t raise rates until after 2023,” Detrick added. “That could be where the market and the Fed do not see eye to eye.”

Of the 11 major sectors in the S&P 500, only materials ended the session green. Energy suffered the largest percentage loss, closing down 2.6%

The CBOE Volatility index, a measure of investor anxiety, closed at 21.85, its highest level since March 11.

Boeing  lost 1.7% after the planemaker announced deliveries of its 737 MAX fell to just four planes in April due to an electrical problem.

Tesla continued its slide, dropping 1.9% after the electric automaker's decision to expand its Shanghai plant owing to heightened US-China tensions.

Mall Reit Simon Property Group fell 3.2% after the company said it does not expect a return to 2019 occupancy levels until next year or 2023.

MARKET WRAP: Miners and tech stocks take toll, with all share falling the most in four weeks

The global tech sell-off that began on Monday in the US continued, with the Nasdaq down almost 2% in afternoon trade
Markets
5 months ago

With talk of tighter regulation from China, tech heavyweights Baidu, Alibaba and Tencent all fell more than 3%
Markets
5 months ago