Shares are stronger amid a surge in commodity prices, while traders brace for release of nonfarm payrolls data 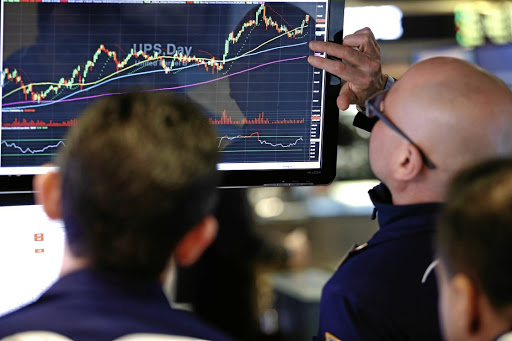 Traders work on the floor of the NYSE in New York. Picture: REUTERS

London — Global stocks headed for their first weekly gain in three weeks amid a surge in commodity prices, while traders braced for a US jobs report later on Friday that could provide clues on when the Federal Reserve will ease back on monetary stimulus.

European stocks opened higher, with the pan-European Stoxx 600 index hitting a record high as strong data from Germany and other major economies added to the hope of a swift recovery from the pandemic shock.

MSCI’s benchmark for global equity markets, which tracks stocks in 50 countries, edged up about 0.1%, on course for a 0.4% gain this week.

Its broadest index of Asia-Pacific shares outside Japan rose about 0.5% on Friday, while Japan’s Nikkei gained about 0.2%.

Aluminium prices approached levels last seen in 2018 and copper hit a record high as investors bet on a rapid global recovery from the pandemic, led by the US.

“We remain positive that the reopening of the global economy will continue, supporting a broadening of growth,” said Mark Haefele, chief investment officer at UBS Global Wealth Management. “That will favour cyclical sectors, such as energy and financials.”

Financials and industrials led Thursday's rally in US shares after a report showed the number of Americans filing new claims for unemployment benefits fell below 500,000 last week for the first since the Covid-19 pandemic started, signalling the labour market recovery entered a new phase amid a booming economy.

The focus now shifts to Friday's nonfarm payrolls report, with estimates ranging widely between 700,000 and more than 2-million jobs having been created in April.

So far, Fed chair Jerome Powell has said the labour market is far short of where it needs to be to start talking of tapering asset purchases. The central bank has said it will not raise its benchmark Fed funds rate through 2023.

“We ultimately expect the Fed to maintain its credibility, and not need to prematurely normalise policy in reaction to a burst in realised and expected inflation this year,” strategists at BCA Research said in a daily note.

“Meanwhile, the improving growth outlook and guidance ahead of tapering will eventually nudge yields higher. Thus, we favour short-duration, value stocks and procyclical equity sectors in anticipation of higher yields over a 12-month horizon.”

The safe-haven dollar sank to its lowest level in a week against a basket of major peers on Friday ahead of the jobs report, as firmness in global stock markets boosted risk appetite.

Treasury yields hovered near the lowest level this month on Friday, further removing support for the greenback, after bond traders largely shrugged off the better-than-expected initial jobless claims data and waited for the no-farm payrolls report to provide market direction.

Gold headed for a 2.5% weekly gain, the most since December, as the weaker dollar and easing treasury yields propelled the precious metal, an inflation hedge, above the psychological $1,800/oz level to last trade at around $1,818.

In the US, the world’s largest oil consumer, jobless claims have dropped, signalling the labour market recovery has entered a new phase
Markets
1 month ago

MARKET WRAP: Retailers and banks lead gains on the JSE

MARKET WRAP: Retailers and banks lead gains on the JSE