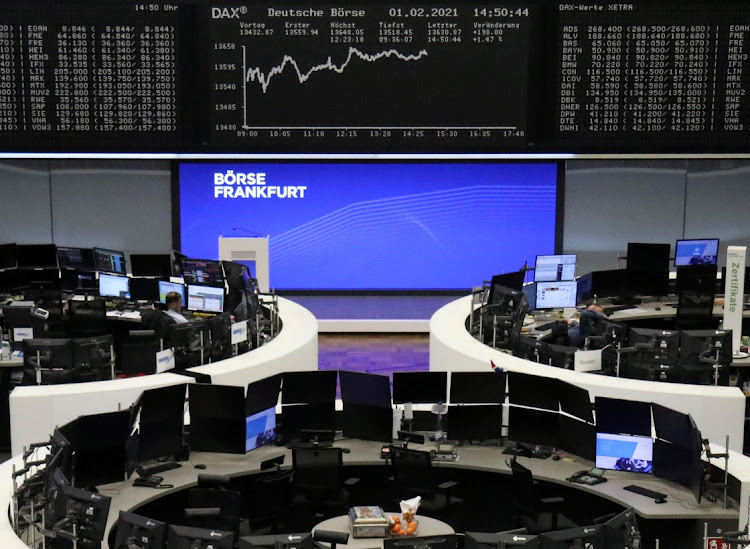 London — European shares gained on Monday as investors bullish about the global economic recovery looked ahead to a busy week for US economic data that is expected to underline the strength of the rebound.

With China, Japan and Britain closed for public holidays, volumes were thin and Asian shares got off to a slow start, with most markets slipping into the red.

But investors’ optimistic mood, enhanced by a strong run of corporate earnings the past two weeks, has extended into May in Europe.

Wall Street futures were higher, pointing to yet more gains after stock markets notched up another round of record highs last week.

The MSCI world equity index, which tracks shares in 49 countries, was flat on the day and below record highs as losses in Asia offset the gains in Europe.

Underpinning investors’ enthusiasm for riskier assets is the sense that the global economy is about to boom as countries come out of lockdowns and consumers and businesses unleash some of their excess savings built up over the past year.

Recent business surveys have also pointed to soaring confidence about the recovery, though some economists think businesses may be getting ahead of themselves and influenced more by the success and speed of Covid-19 vaccination rollouts.

“The data has been unrealistically strong in recent months — while the underlying economy is performing very well, manufacturing growth is not quite at the stratospheric levels the surveys imply,” said UBS economist Paul Donovan.

“Newsflow about the vaccination cycle may be more important in dictating answers to sentiment surveys than actual economic activity.”

A busy week for US economic data is expected to show resounding strength, particularly for the ISM manufacturing survey and April payrolls. Forecasts are that 978,000 jobs were created in the month as consumers spent their stimulus money and the economy opened up more.

Analysts at NatWest Markets, for instance, see US payrolls surging by 1.25-million in April with unemployment diving to 5.2%, from 6% in March.

Such gains could stir speculation of a tapering in asset purchases by the Federal Reserve, though chair Jerome Powell has shown every sign of staying patient on policy.

Powell is due to speak later on Monday and will be followed by a raft of Fed officials this week. Dallas Fed president Robert Kaplan caused a stir on Friday by calling for beginning the conversation about tapering.

Powell’s patience has helped limit selling pressure in Treasuries, yet 10-year yields still ended last week with a rise of six basis points. They were last 1.626%, down marginally on the day.

The rise offered some support to the US dollar, which has been pressured by the rapid expansion of the US budget and trade deficits, a byproduct of the economy’s outperformance.

Cryptocurrency ether scaled a new record high beyond $3,000 as investors bet that it will be of ever greater use in a decentralised future financial system. Its lightning rally — now up 325% in 2021 — has eclipsed that of bigger rival bitcoin.

Oil prices ran into profit-taking, having ended last month with gains of 6% to 8%.