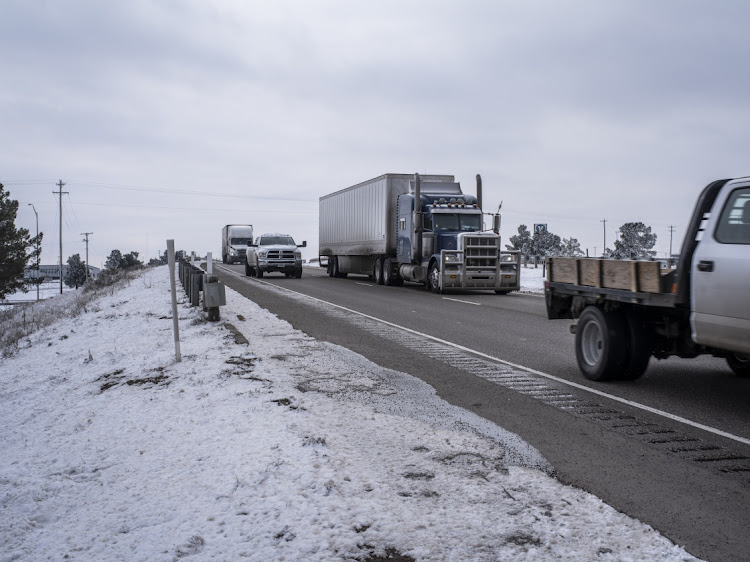 Traffic in Midland, Texas, the US, on February 15 2021. Picture: BLOOMBERG/MATTHEW BUSCH

London — Oil prices fell from recent highs for a second day on Friday as Texas energy firms began to prepare for restarting oil and gas fields shuttered by freezing weather.

Unusually cold weather in Texas and the Plains states curtailed up to 4-million barrels per day (bpd) of crude oil production and 21-billion cubic feet of natural gas, according to analysts.

Texas refiners halted about 20% of the nation's oil processing amid power outages and severe cold. However, on Friday, firms in the region were expected to prepare for production restarts as electric power and water services slowly resume, sources said.

“The market was ripe for a correction and signs of the power and overall energy situation starting to normalise in Texas provided the necessary trigger,” said Vandana Hari, energy analyst at Vanda Insights.

Oil fell despite a surprise fall in US crude stockpiles in the week to February 12, before the freeze. Inventories fell by 7.3-million barrels to 461.8-million barrels, their lowest since March, the Energy Information Administration (EIA) reported on Thursday.

The US said on Thursday that it is ready to talk to Iran about both nations returning to a 2015 agreement that aimed to prevent Tehran from acquiring nuclear weapons.

While the thawing relations could raise the prospect of reversing sanctions imposed by the previous US administration, analysts did not expect Iranian oil sanctions to be lifted any time soon.

“This breakthrough increases the probability that we see Iran returning to the oil market soon, though there is much to be discussed and a new deal will not be a carbon-copy of the 2015 nuclear deal,” StoneX analyst Kevin Solomon said.

The pan European index was up 0.1% but was still set for its first weekly loss in February
Markets
11 months ago