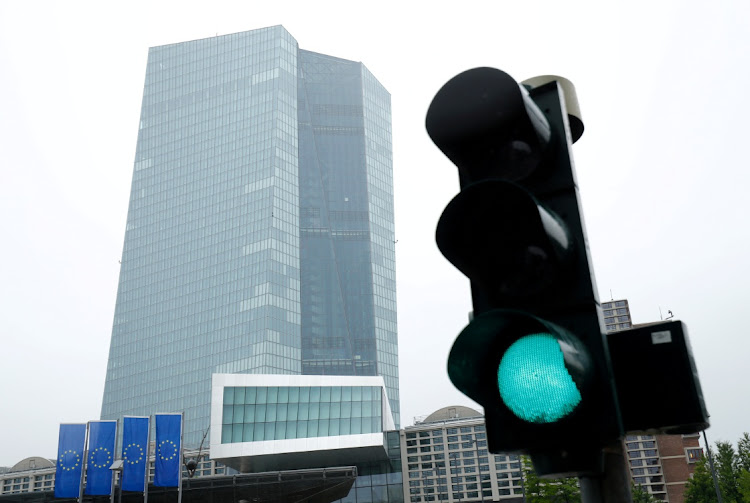 The headquarters of the European Central Bank are pictured in Frankfurt, Germany, July 8, 2020. REUTERS/RALPH ORLOWSKI

It had been a mixed session for Asia amid a surge in coronavirus cases and the ejection of some Chinese stocks from S&P Dow Jones’ indices, so there was little surprise Europe struggled to add to recent highs.

The pan-European Stoxx 600 index was flat, though London’s FTSE 100 did score its eighth straight gain as the Brexit uncertainty pushed the pound down 0.7% to $1.33 and 90.86p per euro.

EU and British leaders gave themselves until the end of the weekend to seal a new trade pact, with about $1-trillion in annual trade at risk of tariffs if they cannot reach a deal by December 31, when transition arrangements end.

“There’s still clearly some scope to keep talking, but there are significant points of difference that remain,” foreign secretary Dominic Raab told BBC TV. “[On] Sunday, they need to take stock and decide on the future of negotiations.”

For the ECB, economists expect its €1.35-trillion PEPP stimulus plan to be expanded by at least €500bn and its duration extended by six months to the end of 2022, with risks skewed towards even more.

The bank will announce its policy decision at 12.45pm GMT, followed by ECB chief Christine Lagarde’s 1.30pm GMT news conference. Traders will be also listening to what she says about the euro’s near 14% rise since March.

“The critical element is that there has been an impact on [eurozone] growth recently," said Shoqat Bunglawala, head of global portfolio solutions for EMEA & APAC at Goldman Sachs Asset Management, referring to the second wave of lockdowns. “So we would expect to see some further support.

In Asian trading, MSCI's broadest index for the region eased 0.4%, with Japan's Nikkei ending 0.2% lower. Both are up more than 60% from March lows.

S&P 500 futures were 0.1% higher after the Nasdaq dropped 2% on Wednesday, when US regulators filed lawsuits again Facebook alleging the company used its dominance to buy or crush rivals, harming competition.

S&P Dow Jones Indices then said it would remove 10 Chinese companies from its equities indices and several others from its bond indices overnight. It followed a move by Donald Trump's outgoing administration to ban US investors from buying certain Chinese securities.

US lawmakers were also unable to sort out disagreements over aid to state and local governments that are holding up a broader spending package, though they did at least approve a stop-gap government funding bill.

“The fall in tech stocks was a bit of a concern, given that they've risen in all market weather over the last six weeks, so to see them come off might signal that we're looking at a short- term corrective move."

“We think the market has certainly got confidence in the sustainability of this recovery,” Goldman's Bunglawala said.

Release of Covid-19 vaccines pushes oil to $49 a barrel

Oil gained even after the latest weekly report on US oil inventories showed a 15.2-million-barrel rise in crude st
Markets
11 months ago

Oil climbs as US prepares to roll out Covid-19 vaccine

Inoculations could start as soon as this weekend, while Canada has also approved the Pfizer/BioNTech shot
Markets
11 months ago
Next Article

Gold treads water as US stimulus talks drag on

Gold treads water as US stimulus talks drag on