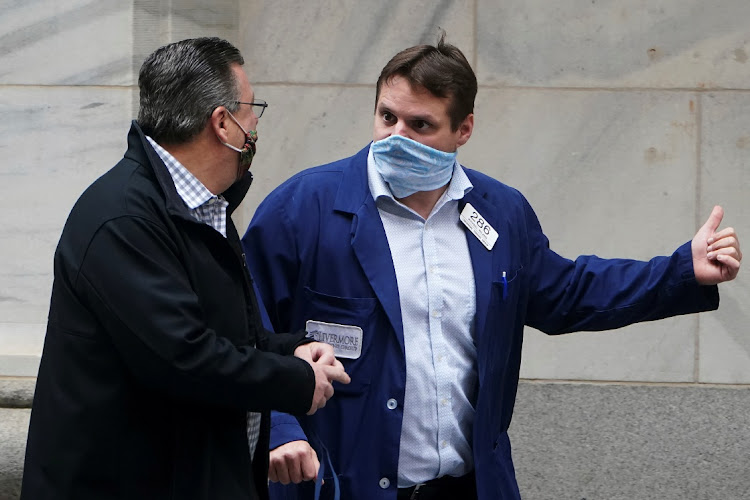 Japan’s Nikkei dropped 0.76%, while MSCI’s broadest index of Asia-Pacific shares outside Japan was little changed, drawing support from better handling of the pandemic in much of the region.

“Given the rapid gains over the last 10 days or so, a correction was inevitable,” said Hirokazu Kabeya, chief global strategist at Daiwa Securities.

Global stocks, measured by MSCI’s broadest gauge of world equities, have risen more than 11% so far in November.

The retail sales report released by the US commerce department showed spending decelerating as the holiday shopping season approaches, amid a lack of fresh fiscal relief from Washington.

A skittish mood also swept investors as several US states began restricting gatherings and mandating face-coverings after more than 70,000 Americans were hospitalised for treatment of Covid-19 by Monday, according to a Reuters tally of public health figures.

“We’re are coming out of a solid two weeks so the market being down 0.5% isn’t that bad with the prospect of Covid lockdowns,” said Jamie Cox, managing partner for Harris Financial Group.

US Federal Reserve chair Jerome Powell noted the current surge in coronavirus cases is a big concern, and the economy will continue to need both fiscal and monetary policy support.

“The soft US retail data is showing the impact of dwindling fiscal support. But the inconvenient truth is that governments no longer have lots of money to spend like they did earlier this year,” said a trader at a major Japanese bank.

“That means investors will expect the Fed to do more and the US yield curve will flatten.”

Bond yields have come down with the 10-year US treasuries dropping to 0.851%, its lowest level since November 9 and off seven-and-a-half-month high of 0.975% touched last week.

Falling US yields put pressure on the dollar, against the yen in particular. The dollar fell to ¥104.18, erasing more than a half of its gains made on Monday last week following the news about Covid-19 vaccine development.

Sterling held firm after UK tabloid the Sun reported that Britain could reach a post-Brexit trade agreement with the EU by early next week.

Oil prices eased on a bigger-than-expected build in US crude stockpiles, though the hope that Opec and its allies will postpone a planned January increase to oil output braked losses.