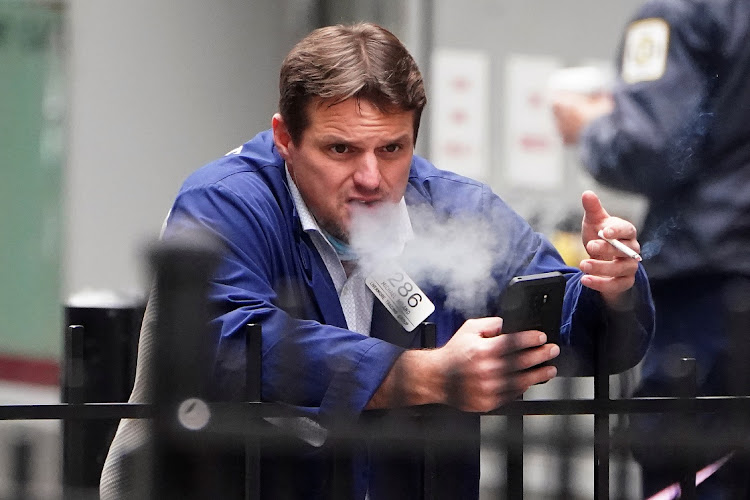 A trader smokes a cigarette outside the New York Stock Exchange, the US, on November 5 2020. Picture: REUTERS/CARLO ALLEGRI

Markets started to trade on the prospect of a Biden presidency and a Republican-controlled US Senate last week, but the Democratic candidate’s projected victory on Saturday gave more fuel to the move.

The MSCI world equity index, which tracks shares in 49 countries, rose 0.5% to a record high in early European hours. On Friday, it posted its biggest one-week gain in nearly seven months.

E-mini futures for the S&P 500 jumped more than 1.4% on Monday. Nasdaq futures rallied more than 2% to just under a record high, signalling a positive start for US markets.

MSCI’s broadest index of Asia-Pacific shares outside Japan jumped 1.3% after hitting its highest since January 2018. The pan-Europe Stoxx 600 climbed 1.5% to one-month highs by 8.46am GMT.

“Why the excitement? Hopes of less diplomatic and trade angst, a lower dollar helps global rebalancing,” Chris Bailey, European strategist at Raymond James in London said in a note. “A lot of hope ... but over two months until inauguration day!”

Equities rallied last week, with the S&P 500 up 7.3%, clocking the best gain in an election week since 1932, according to National Australia Bank analyst Tapas Strickland.

Investors expect Republicans to maintain control of the Senate, making it harder for a Biden administration to push through major policy changes, from a planned tax hike to a big fiscal stimulus package.

That would mean better earnings prospects for companies exposed to the world’s largest economy but also that the US Federal Reserve might have to step in to further ease monetary conditions and support a pandemic-hit economy.

The US saw a record number of new coronavirus infections last week, with the total number of cases nearing 10-million.

Matt Sherwood of Australian fund manager Perpetual, however, said Biden’s win did not necessarily warrant a tweaking of his portfolio.

“In the end, we think the US economy is still fairly fragile and growth’s slowing down,” Sherwood said.

“You could potentially gravitate your portfolio more towards higher-beta type markets, such as emerging markets, and there is potential for better prospects in the energy space than would have been the case with a Democrat clean sweep.”

Oil prices jumped on Monday as investors greeted the prospect of a Biden victory, shrugging off the worry about lacklustre demand amid rising global coronavirus cases. Brent crude added nearly $1 to $40.35.

Analysts said the outlook might get tougher from here as investors focus on Biden’s ability to expand fiscal stimulus and measures to reduce the spread of Covid-19.

US-based wealth manager Jim Wilding at Confluence Financial Partners in Pennsylvania added a word of caution considering the S&P 500 is not far from record highs and equity valuations are generally at heady levels.

“While we remain positive over the intermediate-term outlook and believe divided government reduces the chances of a bear case scenario playing out, we would refrain from unbridled enthusiasm at current levels,” he said.

The expectation that monetary policy in the US will remain easy and global trade relations improve has weakened the dollar in recent days. It posted its biggest weekly loss in more than seven months on Friday.

The dollar index was just above its lowest in about 10 weeks, up 0.1%, while growth and trade proxies such as the Australian dollar and the Chinese yuan remained in demand. The Aussie reached a seven-week high, up 0.4%, and China’s yuan struck a 28-month high.

The euro, which climbed 1.9% last week, was unchanged. Sterling was also flat as the focus turned to Brexit trade negotiations coming to a head with the EU summit on November 15.

Trade wars and higher taxes are largely off the agenda as neither party controls the Congress, analyst says
Markets
11 months ago

Rand soars and JSE erases 2020 losses as vaccine hopes add fire to the ...

Rand soars and JSE erases 2020 losses as vaccine hopes add fire to the ...