But a Trump win, a contested result or just a divided outcome could all trigger corrections in markets 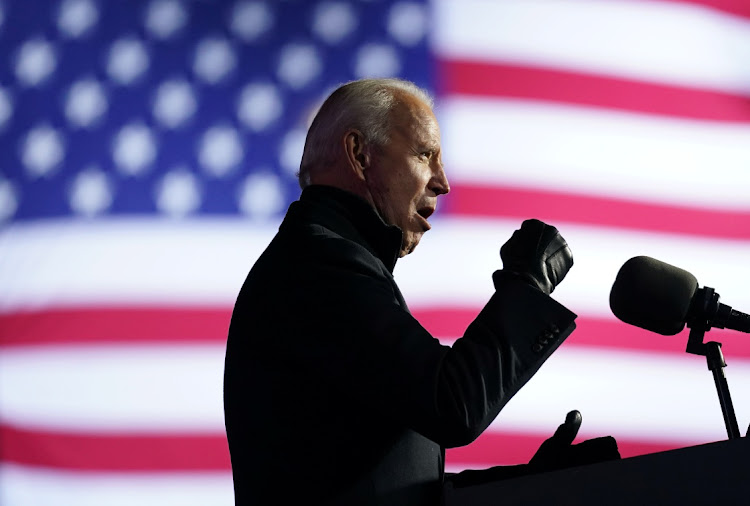 London — European stock markets rose in early trading on Tuesday as investors bet on a clear win for Joe Biden as the US votes in its most polarised presidential election in living memory.

Steady earnings from French bank BNP Paribas lifted its shares 6.5%, adding to a sense that the banking sector was holding up relatively well to an economic pounding from the Covid-19 crisis.

But a 40% fall in full-year earnings at Associated British Foods due to a profit plunge in its Primark clothing business was a reminder of how the pandemic is wreaking havoc with corporate balance sheets. ABF shares fell 1.7%.

US President Donald Trump and Democratic rival Biden made a last-ditch push for votes in battleground states on Monday as their campaigns prepared for post-election legal disputes that could delay a clear outcome.

“Markets are pricing for a Biden win, certainly a clear outcome, and they want a clear and uncontested outcome,” said Michael Hewson, chief market analyst at CMC Markets.

A shock Trump win, a contested result or just a divided outcome could all trigger corrections in markets, he said.

“Control of the Senate is crucial for any ‘blue wave’ scenario to materialise, otherwise divided government continues and fiscal stimulus expectations will need to be scaled back,” added Alvin Tan, Asia forex strategist at RBC Capital Markets.

The pan-European Stoxx 600 index rose 1.3% on a second day of robust gains, having slumped to a five-month low last week.

Growth-sensitive cyclical sectors such as oil and gas, miners and banks once again led the rally — all rising more than 2%

No major European economic data was due on Tuesday, with only a smattering of earnings to steer investors. BNP bank was buoyed by a surge in currency and commodity trading to beat third quarter profit expectations.

Analysts said that while the mood was more upbeat on Tuesday, it remained febrile as European countries introduced tougher lockdown restrictions to fight a pandemic that was set to hit the economy further.

Australia’s central bank became the latest to take action to shore up the coronavirus-hit economy, trimming interest rates to near zero on Tuesday and ramping up its bond-buying plans.

Investors are also awaiting US Federal Reserve and Bank of England meetings this week that are also expected to bring more support.

“The problem with markets is that they are very binary. One day everything is hunky dory and the next day it’s the depths of despair and so you have to tread that tightrope between the two that creates volatility,” CMC Markets' Hewson said.

The global tone was helped by gains overnight on a Wall Street underpinned by US manufacturing activity accelerating more than expected in October, and Asian equity markets and US futures rallying.

The dollar and gold were little changed as currency and bullion traders bunkered down ahead of the US election.

MSCI’s broadest index of Asia-Pacific shares outside Japan had added 1.4% overnight. The gauge is less than 1% shy of a two-and-a-half year high struck in mid-October and up over 5% in 2020 so far, driven by a 37% rebound from China's markets since March.

Strategists at BlackRock Investment Institute said polls were suggesting a greater likelihood of a Democratic sweep in the election.

“We are starting to incorporate themes we believe would outperform in that event, moving towards a more pro-risk stance overall despite last week’s market pullback,” the strategists said in a report.

The MSCI China index hit a 23-year high after Chinese factory activity expanded the fastest in a decade.

Japanese markets were closed for a holiday.

The US dollar hovered just below a one-month high. Against a basket of currencies it held at 93.996. The safe-harbour yen was steady at ¥104.72 per dollar.

The Australian dollar fell 0.2% and Australia’s ASX 200 ended 2% higher as the central bank trimmed interest rates to near zero and expanded its bond-buying programme, as expected.

Oil prices steadied after two weeks of weakness, with Brent futures down 0.2% at $38.89 a barrel, but hanging on to most of an overnight bounce.

SONGEZO ZIBI: On the brink of political crisis: how will the US elections play out?

With the US election almost done, what matters most is whether there will be an orderly transition or not
Life
8 months ago
Next Article