Asian shares stumble on Covid-19 and US election concerns

MSCI’s broadest index of Asia-Pacific shares outside Japan on track to end the week 1.3% lower after four straight weeks of gains 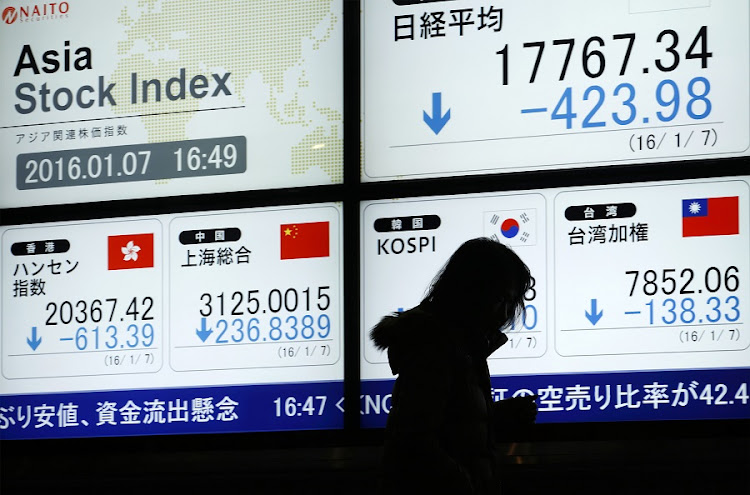 Sydney — A gauge of Asian shares fell for a third straight session on Friday as jitters over upcoming US presidential elections and fears that the global economic downturn will persist enveloped markets, though the index was still set to end the month higher.

MSCI’s broadest index of Asia-Pacific shares outside Japan was last down 0.3%, on track to end the week 1.3% lower after four straight weeks of gains.

The index is up 3.7% in October so far. Analysts expect this broader outperformance to extend further.

“For a crisis of this scale, Asian equities have performed remarkably well,” Citi analysts wrote in a note.

“Within the region, markets with a higher weighting of technology stocks or where the recovery has become more entrenched have outperformed,” they added. “This solid performance can continue, in our view. Valuations are reasonable for an early stage of a recovery while liquidity is generous. There has also been a perceptible drop in volatility in recent months.”

Chinese shares were marginally higher, with the blue-chip index up 0.07%.

E-Mini futures for S&P 500 stumbled 0.9% in early Asian trading, a signal Wall Street would open in the red later in the day.

Record numbers of coronavirus cases worldwide and the November 3 US presidential election remained the major factors looming ahead for investors. On Wednesday, global coronavirus cases rose by more than 500,000 for the first time as France and Germany prepped fresh lockdowns.

The falls in Asia occurred despite a solid session on Wall Street overnight, which was helped by a diet of strong quarterly reports from tech giants and data showing the US economy grew at a historic annualised pace of 33.1% in the third quarter.

“Even with the rebound, US output remains 3.5% below its pre-Covid levels. The path towards recovery is much less clear from here, especially as the number of virus cases grows and there are near-term impediments to a fiscal deal,” wrote ANZ analysts in a note.

Analysts expect an expansion and extension of the ECB’s pandemic emergency purchase programme, a lower deposit facility rate, and even more generous lending terms for banks in December.

In commodities, oil picked up after hitting a five-month low on Thursday, with Brent crude futures up 9c at $37.74 a barrel and US crude adding 11c at $36.28.

Spot gold inches higher, but is on track for a third straight month of declines
Markets
10 months ago

A surge in Covid-19 numbers in the US and Europe has weighed on sentiment this week, while the US national election draws nearer
Markets
10 months ago
Next Article