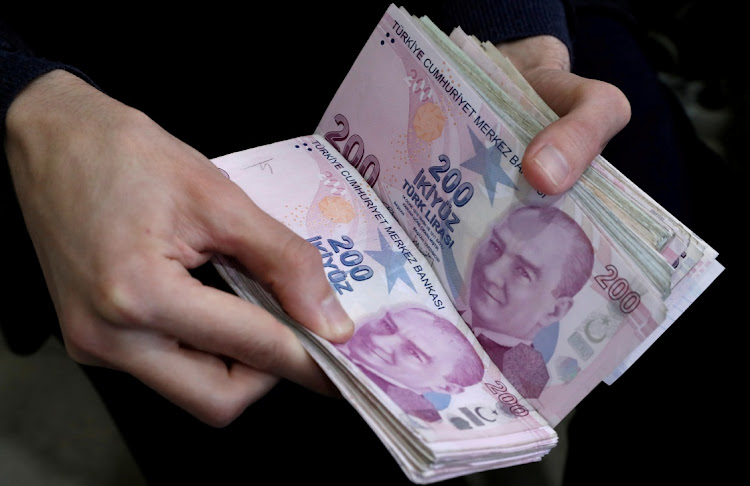 Istanbul — Turkey’s lira weakened through 8 per dollar for the first time on Monday amid deepening scepticism over the central bank’s efforts to shore up the currency at a time of rising geopolitical tensions.

The lira fell as much as 1.7% to 8.0984/$, moving lower after Turkey’s President Recep Tayyip Erdogan urged a boycott of French goods. It was the biggest decline among emerging-market currencies Monday and extended a nine-week streak of depreciation, its longest rout since 1999. The benchmark Borsa Istanbul 100 Index sank 3.8%.

Turkey’s central bank rattled investors last week by unexpectedly keeping rates on hold, a move that halted a brief recovery in the currency ahead of the decision. The regulator has already spent foreign-exchange reserves faster than any other major developing economy to try to support the lira. Foreign investors sold $13.3bn of Turkish equities and bonds this year, the most since at least 2005.

“The lira appreciated ahead of the CRBT announcement on the expectation of further hikes, which did not materialise,” Ehsan Khoman, head of Middle East and North Africa research and strategy at MUFG Bank in Dubai, wrote in a report. “This raises credibility considerations on the commitment of policymakers on prudent policies in a consistent manner.”

Foreign-investor interest in Turkish assets is being additionally sapped by a string of geopolitical risks. Erdogan’s government faces possible US sanctions over the purchase of a missile system from Russia and is engaged in territorial disputes in the eastern Mediterranean and the Caucasus.

Government-owned lenders sold at least $400m on Monday, according to two people with knowledge of the matter, who asked not to be identified because the details are not public. State banks do not comment on interventions in the foreign-exchange market.

Meanwhile, the central bank lent 5-billion lira ($623m) through its traditional repo auction at 14.75%, the higher end of its rates corridor, according to a statement from the monetary authority.

The sell-off in the lira may be exaggerated, according to Piotr Matys, an emerging-market strategist at Rabobank in London. The relative strength index for the dollar-lira pair moved above 70 for the first time in a week, a level that suggests the currency may be poised to reverse.

Still, “the market was left deeply disappointed after last week’s meeting” of the central bank, Matys said. “The path of least resistance is still skewed to the upside due to growing concerns about sanctions and geopolitical tension.”

On Sunday, Erdogan challenged the US to sanction the country over its purchase of Russian S-400 missile defence systems. He also stepped up criticism of Europe’s treatment of Muslims, repeating an attack on his French counterpart Emmanuel Macron by suggesting he needed psychiatric help.

The lira has lost more than 25% in 2020, the worst-performing currency in emerging markets after the Brazilian real. It was trading 1.6% lower in Istanbul.

Locally, investors are awaiting the medium-term budget policy statement due on Wednesday
Markets
11 months ago

A report advises US citizens to be very cautious in locations where Americans or foreigners may gather, including office buildings or shopping malls
World
11 months ago