Equities slip amid an impasse in US fiscal aid package talks, while the dollar holds on to gains 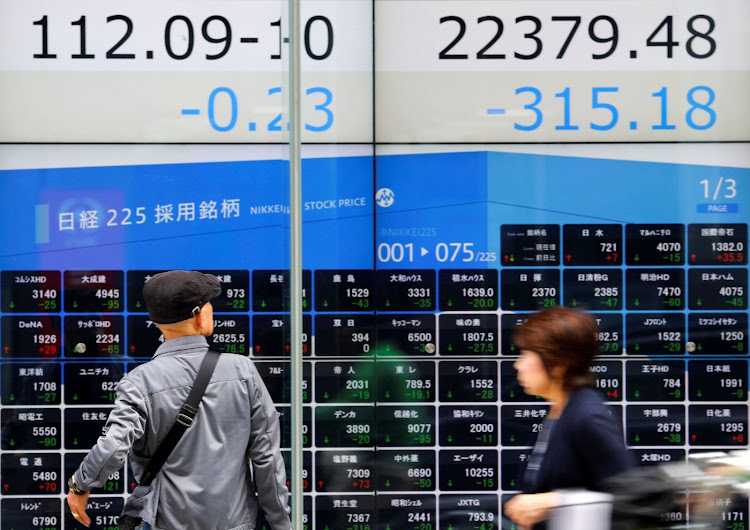 People walk past an electronic board showing Japan's Nikkei average and the yen’s exchange rate against the dollar outside a brokerage in Tokyo, Japan. Picture: REUTERS/TORU HANAI

New York/Sydney — Asian equities slipped on Wednesday as halted Covid-19 vaccine trials and an impasse in US fiscal aid package talks soured risk appetite, while the greenback held on to gains as demand firmed for safe-harbour assets.

Johnson & Johnson (J & ) on Tuesday said it was pausing a Covid-19 vaccine trial due to a study participant’s unexplained illness.

Eli Lilly & Co later said it too had paused the clinical trial of its Covid-19 antibody treatment due to a safety concern, leading the US equity market to deepen losses.

“That just spoke to the fact that a vaccine could take longer to be delivered than what the market’s expectations are calibrated towards,” said CommSec market analyst Tom Piotrowski in Sydney.

Chinese shares opened red too with the blue-chip CSI300 down 0.3%.

Also weighing on sentiment, hopes for the passage of a new coronavirus relief package faded as US House speaker Nancy Pelosi rejected a $1.8-trillion relief proposal from the White House.

“US stimulus talks are still going nowhere dimming the prospect of a new round of support this side of the election,” said Sydney-based NAB strategist Rodrigo Catril.

“So, for now it is hard to see a deal being agreed before November 3, the market is still travelling with the notion that a new round of stimulus is coming, but at this stage this looks more likely after the election.”

E-mini futures for the S&P 500 were up slightly in early Asian trading.

In currencies, the dollar boasted its best daily performance in three weeks on Tuesday with its index against a basket of six major currencies rising 0.5%. The index was last flat at 93.533.

The Australian dollar has been slugged by news that China has stopped taking shipments of Australian coal, dragging the Aussie to one-week lows. It was last treading water at $0.7163.

The Japanese yen gained against the greenback to ¥105.32 to the dollar, while sterling was last trading at $1.2932.

Bank of England governor Andrew Bailey on Tuesday said he did not think the economy was undergoing a V-shaped recovery, because of headwind from a second wave of Covid-19 and underlying public caution about spending and socialising after the pandemic.

Investors are also watching tension between the EU and Britain after the EU demanded “substantive” movement on Tuesday on fisheries, dispute settlement and guarantees of fair competition in their talks on a post-Brexit trade deal.

EU leaders will hold a summit in Brussels on Thursday and Friday to assess progress.

However, oil prices are facing pressure from the supply side, with workers returning to rigs and platforms
Markets
11 months ago

World markets dip on vaccine concern and ahead of US election